The South East Europe Media Organisation (SEEMO), in cooperation with the BETA News Agency in Belgrade, Serbia, is pleased to announce the winner of the 2nd SEEMO Human Rights Photo Award 2009. The jury has chosen the photograph titled, Sudbina (Destiny), by Nebojsa Radosavljevic-Raus, a freelance photographer from Kragujevac, Serbia. The winning photograph was chosen by the jury from 501 photographs sent in by 118 photographers from 14 South East European countries because of its symbolic context; the photograph shows the destiny of animals that are being slaughtered for human consumption and where only one animal manages to escape. In real life, other people often decide the destiny of others and sometimes only luck prevents people from dying without the possibility of deciding their own destiny. 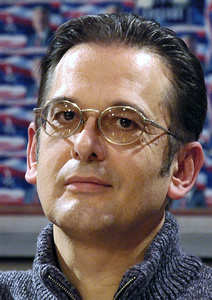 Nebojsa Radosavljevic-Raus was born on 19 April 1960 in Kragujevac, Serbia, and has been working as a professional photographer since 1982. His first photographs were published in the former Yugoslavian student magazines Pogledi and NON. During his career, Raus worked with various well known newspapers throughout former Yugoslavia and the daily Eleftherotypia in Athens, Greece. He is currently working with the Associated Press Agency and the Serbian daily newspaper Blic. He is the author of the book Dogadjanja naroda 1988-2000. Raus has received various awards for his photographs, including the YU PRESS PHOTO in the category people in the news.

This year’s SEEMO Human Rights Photo Award will be presented during a ceremony held today, 22 May 2009, at 17:00, at New Moments Gallery, Hilendarska ulica in Belgrade, Serbia, by Milorad Ivanovic, Deputy Editor in Chief, Blic Daily, Radomir Licina, President of the SEEMO Board, and Oliver Vujovic, SEEMO Secretary General.

For the second time, SEEMO will present the annual SEEMO Human Rights Photo Award. The competition for the SEEMO award is part of the 6th annual BETA Photograph of the Year competition, organised by the BETA News Agency.
BETA has announced its competition for the best newspaper photograph. All professional photographers working for print media in South East Europe, including daily newspapers, local and other papers, magazines, periodicals, news agencies and Internet publications, can participate in the competition, regardless of whether they are full-time or part-time employees, or freelancers. Photographs taken during 2008 and before the application deadline in 2009 may be submitted. The competition will be open until 19 April 2009.

The prizes are EUR 1,000 for first place, EUR 750 for second place, and EUR 500 for third place. Special awards will also be given. As in 2008, SEEMO will award a prize for the best human rights-related photograph shot in South East Europe. Photographs taken during 2008 and before the 2009 application deadline may be submitted

An exhibition of the winning photographs and selected works will open at the New Moment Gallery in Belgrade in the second half of May 2009. The winners will receive their prizes on the first day of the exhibition.

An exhibition catalogue produced by BETA will include all photographs selected by a special jury for the show. All submitted photographs, as well as pictures of the award winners and the official presentation of the prizes, will be posted on a BETA website dedicated to the competition. The photographs selected for the SEEMO award, including the winning photograph, will be presented on the SEEMO Website and in the SEEMO South East and Central Europe Media Handbook and the SEEMO Magazine De Scripto.

The competition’s terms and conditions, as well as application forms, are available on the BETA News Agency’s Website: www.beta.co.rs/fotokonkurs . Each applicant may submit up to five photographs, in 300dpi resolution and JPEG format (no larger than 3MB). Each photograph should include the full name of the author, the title of the event shot, its location, and the date it was taken. Applicants should e-mail their work and application forms to: betafotokonkurs@gmail.com All additional information about the competition can be obtained by writing to the following address: fotokonkursinfo@gmail.com or info@seemo.org

The BETA Photograph of the Year competition was launched in 2004, the 10th anniversary of BETA’s founding. As part of this competition, SEEMO has, since 2008, presented the SEEMO Human Rights Photo Award. The first winner of the SEEMO award in 2008 was Maja Zlatevska (Dnevnik, Skopje) for the photograph “Zatvor” (“Prison”) and her contribution to the human rights struggle in the region. In 2008, SEEMO also issued a Certificate of Distinction to Marko Djurica (Blic/Reuters) for his photograph “Liturgija” (“Lithurgy”).