The South East Europe Media Organisation (SEEMO), in cooperation with the BETA news agency from Belgrade, Serbia, is pleased to announce its presentation of an award for the best photograph in the human rights field. The award, issued for the first time this year, is based on a decision by a jury comprised of Oliver Vujovic, SEEMO Secretary General, Jorgos Papadakis, SEEMO board member from Greece, and Djordje Zorkic of the BETA news agency.

The first winner of this award is Maja Zlatevska (Dnevnik, Skopje), for the photograph “Zatvor” (“Prison”), her contribution to the human rights struggle in the region. The awardee will be presented with a sculpture, designed by Belgrade artist Ivana Dragojevic. 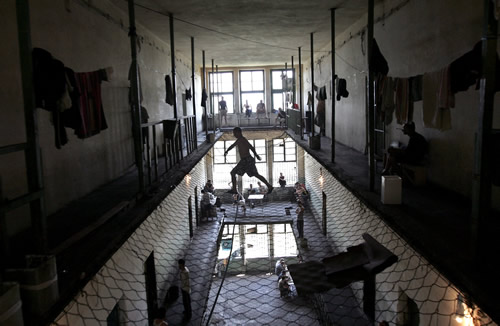 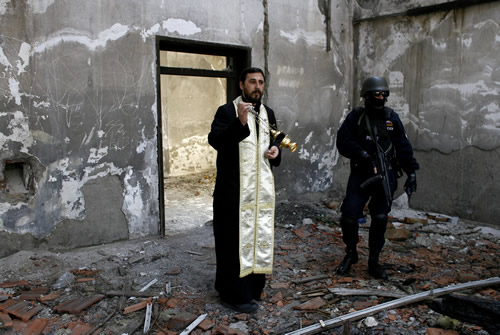 SEEMO will also issue a certificate of distinction to Marko Djurica (Blic/Reuters), for his photograph “Liturgija” (“Lithurgy”).

The awards ceremony was on Monday, 16 June 2008, at 13:00 in the Sava Centre in Belgrade, at the World Congress of the International Press Institute (IPI), of which SEEMO is an affiliate.

Details about the award:

BELGRADE, Feb. 27, 2008 (BETA) – The Beta News Agency called today a competition for the best newspaper photograph taken in the previous year. This is the fifth annual BETA Photograph of the Year competition. This year’s competition, like last year’s, will be international. The competition will be open until April 21 and all professional photographers are invited to compete for the prize.The prizes will be EUR1,000 for first place, EUR750 for second place, and EUR500 for third place. Special awards will also be given. The French Cultural Center in Belgrade will issue a special award for the best photograph taken by a photographer not older than 25. The award is a trip to the Photography Fair in Perpignan, France

An exhibition of the awarded and selected works will open at the New Moment Gallery in Belgrade on June 16, at 6 p.m. The opening of the BETA Photograph of the Year event will be held as part of the International Press Institute’s world congress and the organization’s 57th general assembly. A selection of the best photographs will also be exhibited at Belgrade’s Sava Center, where the gathering will take place. The IPI congress and general assembly are intended to bring together leading journalists, managers, and editors from all continents. The event, hosted by Belgrade’s Media Center, will be held under the slogan “Be in Belgrade.” The competition’s terms and conditions and application forms are available on the BETA News Agency’s Website – www.beta.co.rs

The panel of judges will consist of Ognjen Alujevic (Feral Tribune, Split) as chairman, Zelma Almaleh (BNGES, Sofia), Slobodan Djuric (Dnevnik, Skopje), Dragan Milovanovic (Vecernje Novosti, Belgrade) and Djordje Zorkic (BETA). The BETA Photograph of the Year competition was launched in 2004, the year BETA celebrated its 10th anniversar. BETA’s 2008 Photograph of the Year Competition has no special categories and authors can submit what they believe are their three best works, already published by the media outlets they work for:

– All professional photographers working for any print media in South East Europe – dailies, local and other newspapers, magazines, various publications and periodicals, as well as news agencies – have the right to participate in the competition, regardless of their status as full-time or part-time employees, or freelancers.
-Photographs taken from May 10, 2007 until April 21, 2008, in the course of regular assignments or as proposals to the editors may be submitted.
-Every competitor may submit up to three photographs, in CD format and in 300dpi resolution exclusively, each carrying the full name of the author, the title of the event shot and the date it was taken. The competitors may e-mail their work to \n betafotokonkurs@gmail.com This e-mail address is being protected from spam bots, you need JavaScript enabled to view it . If they think it is in their interest to send photographs on photo paper, their size should be 30x40cm, also providing the above-mentioned data.

– The deadline for submitting works is April 21, 2008 (works sent via mail should be stamped on April 21, 2008 at the latest). Any submissions after that date will not be considered by the jury.