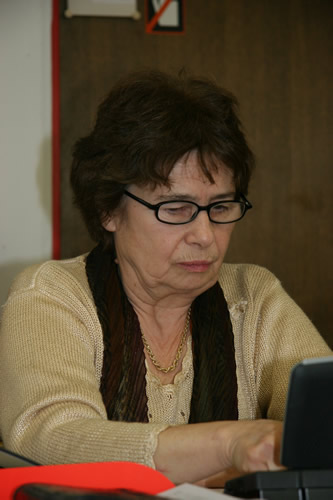 The Vienna-based South East Europe Media Organisation (SEEMO), a network of editors, media executives and leading journalists in South East Europe (SEE) and an affiliate of the International Press Institute (IPI), is pleased to announce that the SEEMO Board has awarded the 2008 “SEEMO Award for Human Rights” to Slovenian journalist, writer and human rights advocate Spomenka Hribar.

Hribar received much publicity in the 1980s with her essay The Guilt and the Sin, which critically exposed the post-war liquidation of Nazi collaborators by the Communist regime. The essay described all liquidations as a crime, demanded an apology and emphasized the importance of public remembrance of these events, especially for purposes of national reconciliation. The essay was initially forbidden in the former Yugoslavia, then published three years later in 1987. Ever since, Hribar has been active in the media with her critical analyses, first of aspects of Communist rule and later of conservative, fundamentalist and nationalistic tendencies within Slovene society.

Hribar was born in Belgrade in 1941, to a Slovenian mother and Serbian father. Her father died in May 1942, as a consequence of imprisonment in Glavnjaca, and Spomenka and her mother moved to Slovenia after World War II. She graduated in philosophy and sociology from the Faculty of Philosophy at Ljubljana University, and obtained her Ph.D. in sociology. Spomenka Hribar is the author of eight books of philosophical and sociological critical content.

For decades Hribar cooperated with a range of top thinkers from all republics of the former Yugoslavia. Just before the first free democratic elections were held in Slovenia, Hribar entered politics. She actively contributed to aspirations for an independent Slovenia. Hribar left the Democratic Opposition when the party veered into a more conservative, fundamentalist and nationalistic direction after Slovenia gained independence.

Even after leaving politics Hribar remained a critical observer of developments in Slovenian society. Hribar’s endeavours and criticisms are based on a consistent respect for human rights, human dignity, freedom and responsible autonomy. Hribar strives to promote ethics amongst all levels of society, and her endeavours aim to further respect for all minorities, equality of the sexes, as well as more tolerance and conciliation in Slovenian society.

The “SEEMO Award for Human Rights” is an annual award dedicated to International Human Rights Day, on 10 December. SEEMO has been presenting the award since 2002.
In the year 2002, Christine von Kohl, editor-in-chief of the Vienna-based Balkan – Südosteuropäischer Dialog magazine received the award. In 2003, the recipient was Nebojsa Popov, founder of the Belgrade-based magazine Republika. Fatos Lubonja, an Albanian author, received it in 2004. Abdulhalim Dede, a journalist and member of the Turkish-Muslim minority living and working in Western Thrace, Greece, was the 2006 recipient. Seki Radoncic, author of the book ‘The Fatal Freedom’ and active in investigating war crimes in the former Yugoslavia, received the award in 2007.

****
The 2008 award was presented to Spomenka Hribar at 19:30 on Wednesday, 10 December, by Oliver Vujovic, SEEMO Secretary General, and Jorgos Papadakis, SEEMO Board Member, at the BTC, Smartinska 152 in Ljubljana. Joze Mermal, the president and CEO of BTC, will host the event.