Results of the SEEMO “Dialogue Conference of editors-in-chief, media executives and leading journalists of Roma media from East and South East Europe”

SEEMO successfully concluded a two-days conference of editors-in-chief, media executives and leading journalists of Roma media from East and South East Europe, which was held on 2-3 July 2003 in Belgrade. More than 70 participants from the region, including editors-in-chief and media executives of Roma media, took part in the meeting, as well as various international guests.

During this meeting, SEEMO founded a section within the organisation consisting of Roma editors-in-chief and media executives from East and South East Europe. Members of the newly founded Board of Roma media executives are Peter Stefanov (Bulgaria), Jarmila Balazova (Czech Republic), Zoran Dimov (FYROM), Orhan Galjus (Holland) and Dragoljub Ackovic (Serbia). The newly elected Board of Roma media executives will provide regular input to the SEEMO Board and SEEMO Secretary General, but also to other international organisations and institutions.

As result of the meeting, the following conclusions and appeals to the international community and political representatives were put forward:

In the last ten years, there have been several International meetings, where problems of the Roma media were discussed, including:

III. International Conference of Roma Editors-in-Chief in May 1997 in Budapest, Hungary.

IV. International Conference of Roma Editors-in-Chief on 4-7 February 1999 in Ohrid, Republic of Macedonia-FYROM with 110 participants from 31 countries.

Over the last five years, there have been at least ten similar meetings with national and regional character where topics concerning Roma Media were discussed. In general, the same questions and problems have been elaborated as the most crucial problems of Roma media.

1. The situation of Roma Media, nationally and internationally, is not satisfactory. This is influenced by:

– Legal regulations connected with minority media in some countries;

– Lack of professional Roma journalists in the region;

– Lack of financial sources for financing the work of Roma Media.

2. In order to overcome this unsatisfactory situation, especially in countries with large Roma populations, a network of Roma Media on a European level should be created. This is necessary because:

– Roma Media have no means for presenting the wide spectrum of information available, because the conditions for information exchange are very limited. One of the reasons for this situation, as concluded at the SEEMO meeting, is the lack of cooperation between Roma Media. Therefore, it was recommended at the SEEMO meeting to develop this cooperation between Roma Media as soon as possible.

– The establishment of a data base for information exchange, about Roma or in the Romany language. The recommendation of the SEEMO meeting is that some of the existing Roma Media should take upon themselves the coordination of these activities.

3. It is especially important to emphasize the development of print Roma media. Print media in the Romany language are important because of:

– The standardisation of the Romany language, which is realized through print media;

The recommendation is that:

Governments and governmental institutions should buy parts of these print copies published by Roma and distribute them free of charge to interested users.

4. In connection with the lack of professional journalists’ staff among Roma populations, it was concluded that: Editors and journalists of Roma Media are mostly people without appropriate education, and because of that reason it has been recommended:

– To organize local and regional courses for journalists from Roma Media;

– That the SEEMO IPI Media Minority Centre in Opatija, among others, undertake activities connected with training and courses for Roma journalists and editors, in cooperation with representatives of minority media and all other interested parties.

5. Because of the existing practices of different forms of discrimination against representatives of Roma Media, the recommendation is:

Roma journalists should inform SEEMO in Vienna about all the problems which representatives of Roma Media have during their work, especially with regard to police, customs or border police. On the basis of this information, SEEMO will act according to the practice of IPI. It was agreed:

– Members of the Board are: Peter Stefanov – Bulgaria, Jarmila Balazova

– Board meetings will be held in Vienna at SEEMO headquarters or at some other agreed place.

6. Because of the lack of managing staff in Roma Media, it has been suggested:

– To organize seminars for management of Roma Media;

– To hold the first seminar in Opatija in November 2003, organised by the SEEMO IPI Media Minority Centre.

7. Special emphasis should be placed on production development and information exchange in Roma electronic media, as well as on the protection of copy rights.

8. With regard to the fact that in certain situations non-Roma Media display a misunderstanding towards Roma, we appeal:

9. Programmes in the Romany language should be initialised within all public services or state media in European countries. It has been recommended:

To send a recommendation to all Governments in countries in which Roma have these problems.

10. The Conference recommends to all employees in Roma media to become members of local and international journalists’ associations in order to preserve their rights and to protect the interests of their profession. 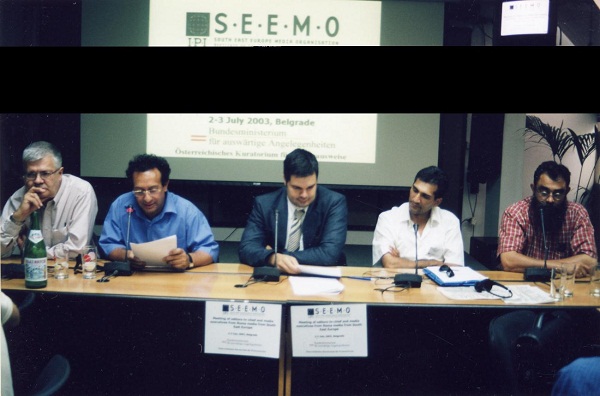