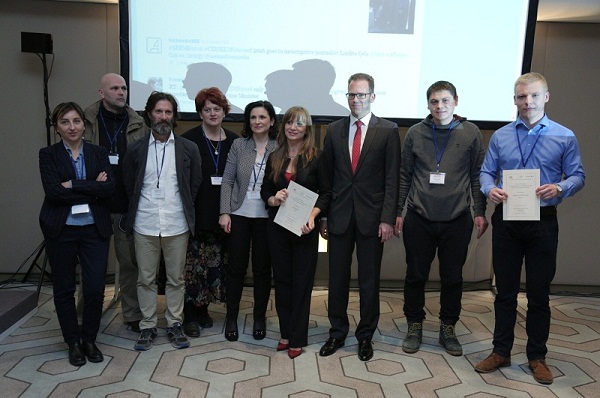 The Central European Initiative ( CEI) and the South East Europe Media Organisation (SEEMO), in special partnership with the Media Program South East Europe of the Konrad Adenauer Stiftung ( KAS), have announced the winners of the “CEI SEEMO Award for Outstanding Merits in Investigative Journalism 2016”:

Lindita Çela in the section “Professional Journalists” and Artsiom Harbatsevich in the section “Young Professional Journalists”. Lindita Çela, an investigative journalist at the Balkan Investigative Reporting Network (BIRN) in Albania, has been awarded for her overall professional achievements and hard-hitting investigations exposing corruption scandals in the highest levels of power as well as revelations on Albania’s organised crime networks, stretching from the Accursed Mountains to the streets of Brussels. For over more than 15 years of experience as a reporter, she has been covering complex stories with a huge impact in Albanian society, showing impressive courage and determination.

Artsiom Harbatsevich, a young journalist from Minsk, Belarus, with working experiences at Intex – press and Nasha Niva, has been awarded for his activity as investigative reporter producing some works having great impact and repercussions in his country. In particular, in one investigation, he examined the pro-Russian paramilitary groups receiving support from Russian funds, while in another work he exposed the channel through which Belarusian teenagers from a border region were taken to military training in Russia.

Çela and Harbatsevich will officially receive the awards offered by the CEI (4,000 EUR and 1,000 EUR respectively) on the occasion of the X South East Europe Media Forum (SEEMF) in Belgrade, Serbia, on 21-22 November 2016.

A Special Mention has been assigned to Iurie Sănduță, director of RISE Moldova and member of the Organized Crime and Corruption Reporting Project (OCCRP). As a specialist in cross-border investigations, coordinating the investigation department at Ziarul de Gardă in Chișinău, his work is also well-known in the Romanian media, especially in recent years, when he revealed several high -level corruption schemes, disclosing the criminal organisation and making connections in offshore areas. He is the co-author of the investigative border projects “A Murderer’s Trail” and “The Russian Laundromat”.

35 nominations, covering 12 countries, have been submitted this year, confirming the region-wide impact and relevance of the Award.

The Central European Initiative (CEI) and the South East Europe Media Organisation (SEEMO), in special partnership with the Media Program South East Europe of the Konrad Adenauer Stiftung (KAS), have opened the Call for Applications 2016 of the CEI SEEMO Award for Outstanding Merits in Investigative Journalism. The Call is divided into two categories:

The Award, launched in 2008, aims to honour the work carried out by investigative journalists and their contribution to investigative reporting despite the difficult conditions under which they often have to operate.
Applications will be examined by an international jury made up of distinguished journalists and media experts from the region, which may also include winners of previous editions of the Award.
The awarding ceremony will take place during the South East Europe Media Forum (SEEMF) in Belgrade, Serbia, on 21-22 November 2016

Submission modalities
Candidates have to be recommended by trustworthy individuals, journalism and media organisations, media companies, civil society organisations, journalism schools or universities, trade unions or other social organisations from the target countries. The nominator should write a recommendation letter and make it available to the nominee/candidate.
The nominees/candidates have to go through an online application procedure and provide all necessary documents for the application in digital form (see details below).

The following documents in PDF format shall be uploaded:
1. Curriculum Vitae (personal and professional data sheet according to Europass format or similar);
2. A recommendation letter;
3. Up to three samples of journalistic work in a single PDF document (minimum two samples in Category 1, one sample in Category 2). For online work samples, insert hyperlinks in a PDF document, or print out online articles in a PDF file. Hyperlinks need to be accessible at least until 30 June 2016. In case of audio/video material, please upload the files making use of file-sharing services (e.g. WeTransfer or Dropbox) including a script or scenario.
Material prepared in local languages should be accompanied by a short summary in English.

The jury will take into account the relevance of the matters covered by the reports, which should have a focus on the target countries, as well as the quality of reporting in terms of documentation, data, writing and production. The personal risks taken while performing the duties as well as the impact on society of the messages conveyed will also be evaluated.

Central European Initiative (CEI) – www.cei.int
The CEI is a regional intergovernmental forum committed to supporting European integration through cooperation between and among its Member States and with the European Union, other interested public institutions or private and non-governmental organisations, as well as international and regional organisations. In order to offer a solid contribution to European integration the CEI combines multilateral diplomacy and project management, both as donor and recipient, while also bridging European macro-regions. The CEI, whose Headquarters is located in Trieste, is composed of 18 Member States: 10 EU members (Austria, Bulgaria, Croatia, Czech Republic, Hungary, Italy, Poland,Romania, Slovakia, Slovenia) and 8 non-EU members (Albania, Belarus, Bosnia and Herzegovina, Macedonia, Moldova, Montenegro, Serbia, Ukraine). In December 2011, the CEI was granted the Observer Status in the General Assembly of the United Nations.

South East Europe Media Organisation (SEEMO) – www.seemo.org
The SEEMO is a regional non-governmental, non-profit network of editors, media executives and leading journalists from newspapers, magazines, radio and TV stations, news agencies and news media in South East and Central Europe. With its committees, the SEEMO aims to create a bridge between international media activities and the media developments in the region. One of SEEMO’s main activities is protecting press freedom by helping journalists and media outlets in South East and Central Europe. Over 60 percent of SEEMO’s press releases and letters of protest to governmental and other officials have had positive results. The SEEMO works in cooperation with the International Academy – International Media Center (IA-IMC) and the South East and Central Europe PR Organisation (SECEPRO).

Konrad Adenauer Stiftung (KAS) – www.kas.de/medien-europa/en/
With 80 offices and projects in more than 100 countries worldwide, the KAS contributes to promoting democracy, the rule of law and social market economy. An essential part of this work is the promotion of free and independent media and the support of professional and ethical media coverage. The Media Program South East Europe, established in 2007, is part of the global media programme of the KAS. It concentrates its efforts in this field in three main directions – education and trainings for journalists, who recognise their social, political, informational and watch-dog role; media policy and media ethics for an independent and multifaceted media landscape; and a professional and valueoriented political communication serving for a better understanding between citizens, politicians and civil society