The Central European Initiative (CEI) and the South East Europe Media Organisation (SEEMO) are pleased to announce that the Croatian journalist Drago Hedl is the winner of the CEI Award 2008 for Outstanding Merits in Investigative Journalism.

It was unanimously decided that the Award should go to the Croatian journalist Drago Hedl with the Serbian Brankica Stankovic as a close runner-up.

The CEI Award will be bestowed on the occasion of the “CEI Forum for Journalists”, to be held in Wroclaw, Poland, on 2-3 June 2008 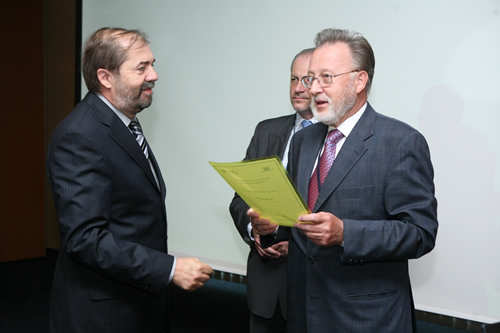 The Jury based its decision on the integrity and personal courage demonstrated by Hedl in carrying out his work on war crimes committed against civilians in the eastern city of Osijek in 1991. According to the Jury, “writing about war crimes is not something that makes a journalist popular. People are unwilling to confront the dark side of the war, and often dismiss those who report on it as traitors. With this unpopular image Hedl has to continue living in Croatia”.
Drago Hedl is editor and journalist of the critical political weekly Feral Tribune from Split. He also worked for the dailies Novi list, Rijeka, Slobodna Dalmacija, Split, Glas Slavonije, Osijek and the literary magazine Revija, Osijek. He collaborated with the Institute for War and Peace Reporting in London. Many of his articles were published in leading print media in Great Britain, Germany, Switzerland, USA and the Czech Republic.

Hedl was the scriptwriter of the film “Vukovar: the Final Cut”, directed by Janko Baljak from Belgrade, produced by TV B92 (Belgrade), as a joint Serbian-Croatian recreation of the Vukovar war in 1991.

Hedl, born 1950, has been an active journalist for over 25 years. He holds a Bachelor degree in Yugoslav literature from the Osijek Academy. He received the Knight International Journalism Award in 2006, his film “Vukovar-Final Cut” received the Human Rights Award at the 12th Sarajevo Film Festival in the same year. In 2006 he was also nominated Journalist of the Year of the Croatian Journalist’s Association. In 2004, he received the Golden Microphone award by the Croatian Association of Radio and Newspapers, and in 2001, together with his wife Ivana who is also a journalist, the annual award of the Croatian Journalist’s Association for the best interview in the year 2000.

Yet, in all this years, rather than accepting honours, he became more used to defending himself in court. Because of his work, he received numerous death threats (the latest in February 2008), which naturally affect not only himself, but his wife Ivana and his son Matija, a biochemist, as well.

The Central European Initiative (CEI) is an intergovernmental forum with its headquarters in Trieste, Italy, composed of 18 Member States: Albania, Austria, Belarus, Bosnia and Herzegovina, Bulgaria, Croatia, the Czech Republic, Hungary, Italy, Macedonia, Moldova, Montenegro, Poland, Romania, Serbia, Slovakia, Slovenia and Ukraine. The CEI has traditionally paid attention to the area of information and media and encouraged the role of independent media in its Member States. In view of the difficult conditions under which journalists are frequently exercising their profession, in 2008, the CEI, in cooperation with SEEMO, has launched the first edition of the CEI Award for Outstanding Merits in Journalism (with a focus on investigative journalism), endowed with 5.000 EUR.