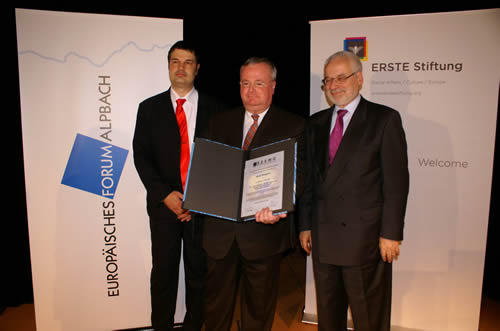 Technology has brought us the auto cue, which is nowadays not only reserved to people making television but increasingly used by statesmen. The purpose of auto cue, which is in our slang sometimes also called “the dummy” – is when used by politicians to make them look wise, convincing and not to forget the most important.

We, the people from television use the autocue in particularly in the news programs of course also for everything I mentioned – meaning to look smart, unforgettable and convincing – but also to keep to the available timeframe and not to talk endlessly.

Therefore, in order not to keep talking endlessly let me use this paper to replace the auto-cue.

First of all let me thank you for this prestigious award.

It is a special pleasure and honour to receive this award by the esteemed dr. Busek who this award is also named after. Dr. Busek is one of the most relentless driving forces of peaceful crossborder cooperation and development of southeast Europe I know. He is a man who links great ideas also to small everyday and human steps. And this is surely the only way to succeed.

There are many things that we share and have in common – the intercultural character of family origin and the feeling of being a part of something which is called central European culture or manners.

I myself have experienced the intercultural character in my own family. I was born to a father who was a Slovene to see the light of day in the very heart of Austrian Carinthia and a mother who was of Austrian-German origin but spent most of her life in Maribor.

Because of this the understanding of any kind of minorities along with crossborder focus and perspective have been virtually handed over to me on a silver platter.

The time in this area played a very strange role with our destinies and many things that once used to be in place had to be rebuilt.

The Alps-Adria programme has been the first herald but not of reviving the old but of a search for methods to overcome the ideological and political barriers and resentments. I believe that this has been an important step towards new Europe.

An expression of this were also the efforts to talk about our truths and interests not only to ourselves and one against the other but in a crossborder dialogue.

This is what led to the first Austrian-Slovene TV documentary on Slovenes living in Austrian Carinthia which was created by the unforgettable Helmut Andics and me under the very meaningful title – Two is More than One. At that time, many blunt truth has been heard by the people on both sides of the border for the first time making them think – and keep wondering.

Although, all my life as a journalist I focused exclusively on foreign policy the questions by all kinds of minorities, in particular ethnic ones have always specially attracted my attention, just as the Balkans. I am both proud and sad that I am also someone from the Balkans. For me this has always been the synonym of a magical creative force, creativity and inspiration, a major opportunity which keeps longing for a bright future- but always remains caught by the past.

Therefore, allow me to underline at this point just one thing: we should not allow that hatred between these nations should ever be re-ignited, sparked by biased media which have been so many times by now subject of hatred, politics and nonprofessional attitude.

Srebrenica from the nineties has become a symbol, but let us not forget that the same happened in this very area in the forties of the past century. This is the most frightening. To realize that history has not taught us a lesson.
Independent and developed, unyielding and responsible media is the most effective tool for maintaining democracy and peace. Therefore, let me invite you to make special continuous efforts for their leverage in southeast Europe in order not to allow any hegemony by anyone.
This is especially true for public broadcasting media whose existence and development are still and over and over again under threat. Let us not allow them to lag behind in their technological progress. The dark forces require darkness. They can only be discouraged by light.

Crossborder concern and all-round assistance regarding this media is certainly the strongest guarantee for peace and prosperity. “

After careful deliberation, the international jury has chosen Boris Bergant, born in April 1948 in Maribor, Slovenia, in recognition of his continuous and outstanding contribution for better communication, exchange and cooperation between the public services in different countries in the South East European region. The jury based its decision on the integrity and personal dedication of Boris Bergant in carrying out his work.

Boris Bergant is the co-founder of the broadcasting project, Alpe Adria 1983, the oldest European trans-border radio and TV project still in operation. He has been involved his entire life in the issue of national minorities and established the first pan-European TV co-production, Minorities-the Wealth of Europe (1983-1986), with 14 countries participating. With the support of the International Federation of Journalists (IFJ), IPI and UNESCO, Boris Bergant established a regional centre for professional assistance and humanitarian help in Ljubljana, Slovenia, during the war in ex-Yugoslavia (1991-1995).

In his work for the European Broadcasting Union (EBU) in Central, Eastern and Southeastern Europe, Boris Bergant co-organised the establishment in 1999 of the new independent RTK Kosovo, where he is still a member of the Board of Directors.

During his career, Boris Bergant has received many awards for his work as a journalist, including the Tomsiceva Award for journalistic achievement in Slovenia, and prizes at TV festivals in Monte Carlo, New York and Leipzig.
The Dr. Erhard Busek – SEEMO Award for Better Understanding is sponsored by Dr. Erhard Busek, Jean Monnet Professor ad personam, President of the Institute for the Danube Region and Central Europe, Coordinator of SECI – Southeast European Cooperative Initiative, former Special Coordinator of the Stability Pact for South Eastern Europe, and President of the European Forum Alpbach.

In 2002, the jury honoured the Croatian journalist, Denis Latin, with the award. In 2003, it was presented to Kemal Kurspahic, former editor-in-chief of the Sarajevo daily Oslobodjenje. Brankica Petkovic, Head of the Center for Media Policy at the Peace Institute in Ljubljana, Slovenia, was the recipient of the 2005 award. Danko Plevnik, international relations columnist for the Croatian daily Slobodna Dalmacija in Split, was the winner of the 2006 award. Milena Dimitrova, commentator for the Bulgarian daily newspaper Trud in Sofia, was the winner of 2007, and Brankica Stankovic, editor for TV B92 in Belgrade, Serbia is last year’s winner.

The South East Europe Media Organisation (SEEMO) is pleased to announce the Dr. Erhard Busek – SEEMO 2009 Award for Better Understanding in South East Europe. Sponsored by Dr. Erhard Busek, Coordinator of the Southeast European Cooperative Initiative (SECI), Chairman of the Institute for the Danube Region and Central Europe (IDM), and President of the European Forum Alpbach, the EUR 2,000 award will be presented to a journalist, editor, media executive or journalism trainer in South Eastern Europe, who has promoted better understanding amongst peoples in the region and worked towards ending minority-related problems, ethnic division, racism, xenophobia, etc.

In 2002, the international SEEMO jury chose Croatian journalist Denis Latin as the recipient of the Dr. Erhard Busek – SEEMO 2002 Award for Better Understanding in South East Europe, in recognition of his outstanding contribution toward better understanding in South Eastern Europe through his television programme Latinica. In 2003, the award was presented to Kemal Kurspahic, former editor-in-chief of the Sarajevo daily Oslobodjenje. The 2005 award was given to Brankica Petkovic, Head of the Center for Media Policy at the Peace Institute in Ljubljana, Slovenia. In 2006, the Croatian journalist Danko Plevnik, international relations columnist for the Split-based daily Slobodna Dalmacija, was the recipient of the award. The Bulgarian investigative journalist Milena Dimitrova received the award in 2007. In 2008, the SEEMO jury chose Brankica Stankovic, editor for RTV B92 in Belgrade, who introduced new and improved standards of professionalism to Serbian journalism and has addressed in her TV programme, The Insider (Insajder), important issues that have been either concealed or sidelined by the Serbian authorities.

If you know of anyone who would be a worthy recipient of the Dr. Erhard Busek – SEEMO Award for Better Understanding in South East Europe, please send a letter by regular post or email to SEEMO with basic details about the candidate (along with a professional CV describing why he/she should receive the award), as well as his/her contact information (media organisation, address, phone, fax, email). In case you would like to nominate a media outlet or an organisation/institution, please always provide details of its representative, as the award can be presented to individuals only.

Please send us any additional material about the nominated person (TV reports on video or DVD, audio reports on cassette or CD, or copies of articles in print media) by regular post to our Vienna office, if possible with a brief English translation. Unfortunately, supporting material cannot be returned, so please always send copies of the original material.

Please send your nomination and supporting documents to:

The deadline for applications for the Dr. Erhard Busek – SEEMO 2009 Award for Better Understanding in South East Europe is: 15 May 2009. The award will be presented on 15. October 2009 in Vienna, Austria. SEEMO will announce the winner in an official press release some days before the presentation.