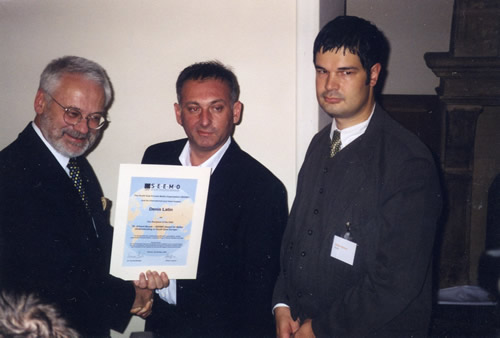 The South East Europe Media Organisation (SEEMO) and its international jury have chosen the Croatian journalist Denis Latin as the recipient of the 2002 “Dr. Erhard Busek – SEEMO Award for Better Understanding in South East Europe”, in recognition for outstanding efforts in journalism which contributed toward better understanding in South Eastern Europe. Latin was selected from among more than 400 nominations received by SEEMO.

Latin, a leading political journalist in Croatia, is the editor and presenter of one of the most popular political TV programmes in Croatia, “Latinica”, on Croatian Radio and Television (Hrvatska radiotelevizija). He also writes a regular column in the magazine Nacional. In the early 1990s, he was one of the editors of “Slikom na slikom” (Picture on Picture), also on Croatian TV. Last year, he received the “Journalist of the Year 2001” prize from the Croatian Association of Journalists.

Latin was never afraid to work toward a better understanding among peoples, even when prevented from reporting. Through his work, Latin has fought xenophobia, as well as ethnic, racial and religious divisions, while at the same time promoting diversity and pluralism.

The “Dr. Erhard Busek – SEEMO Award for Better Understanding” is sponsored by Dr. Erhard Busek, Special Coordinator of the Stability Pact for South Eastern Europe and Chairman of the Institute for the Danube Region and Central Europe.