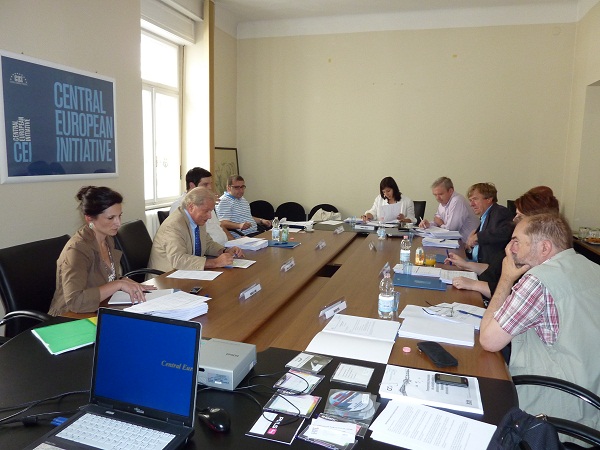 The Central European Initiative (CEI) and the South East Europe Media Organisation (SEEMO) are pleased to announce that Adrian Mogos from Romania is the winner of the CEI SEEMO Award for Outstanding Merits in Investigative Journalism 2010.

On 2 July 2010, the international jury met in Trieste at the CEI Headquarters and examined a total of 24 nominations from 11 CEI Member States. The personal risks taken while performing the duty, the quality of reporting as well as the impact on society of the messages conveyed were the main criteria taken into account by the Jury.

It was unanimously decided that the Award should go to Adrian Mogos, investigative journalist from Romania. With this selection, the Jury intended to promote the high-quality cross-border investigative journalism carried out by Adrian Mogos, cooperating with colleagues in different countries while raising important issues to the public awareness. His work represents a good example for the young generation of journalists. Adrian Mogos will receive the Award of 5.000 EUR, offered by the CEI, on the occasion of the traditional CEI Journalists Forum, to be held in Warsaw, Poland, at the end of September 2010.
The jury was composed of Norbert Mappes Niediek, free-lance South East Europe correspondent based in Graz (Austria); Franca Roiatti, foreign affairs desk, Panorama weekly, Milan (Italy); Andrzej Godlewski, Commentator, Polska The Times, Warsaw (Poland); Marina Constantinoiu, editor-in-chief, Jurnalul National daily, Bucharest (Romania). Drago Hedl, editor and journalist of the daily Jutarnji list, Zagreb (Croatia), and Besar Likmeta, BIRN Editor-Project Manager, Tirana (Albania) – the winners of the editions 2008 and 2009 of the Award – were also members of the Jury. The meeting was also attended by Oliver Vujovic (SEEMO Secretary General) acting as advisor together with Ambassador Gerhard Pfanzelter (CEI Secretary General) and Barbara Fabro (CEI Senior Executive Officer).

Ambassador Gerhard Pfanzelter highlighted the commitment of the CEI to media issues in its Member States, especially with a view to encourage the role of independent media and give particular credit to those journalists who frequently exercise their profession under difficult conditions. According to Oliver Vujovic, investigative journalists are important for democratic developments of each country in the CEI / SEEMO region.

Adrian Mogos was born in 1974 in Cluj – Napoca, Romania. Currently, he works for the Romanian daily Jurnalul National. He is member of the executive committee of the Organized Crime and Corruption Reporting Project (OCCRP) and the Romanian Centre for Investigative Journalism. Mogos has published plenty of investigative reports on Romanian media, but has also worked on several regional investigative projects. Among the main achievements as investigative journalist the following deserve mentioning: Forged Identity – highway to EU story, which was published in mid-October 2009 in the Jurnalul National and an English version by Balkan Insight online publication. Afterwards, the story was largely republished throughout the CEI / SEEMO region in Albania, Bulgaria, Macedonia/FYROM, Serbia and Italy. Another investigative story is The Fields of Terror – the New Slave Trade in the Heart of Europe, a joint production of Romanian, Moldavian and Ukrainian journalists under Adrian Mogos’ coordination. The story, published in December 2009, is a cross-border investigation about forced labour networks still active in some countries in Western Europe. Adrian Mogos produced many others investigative pieces on different topics: illegal deforestations in Romania, suspicious public tenders organized by the local authorities, abuse against Roma children, who are trafficked to UK etc.

Moreover, the Jury decided to award in 2010 a special mention to Iryna Khalip from Belarus and Lydia Pavlova from Bulgaria for their valuable contribution to investigative journalism in their own countries. For that, they will receive a CEI SEEMO diploma during the CEI Journalists Forum 2010.