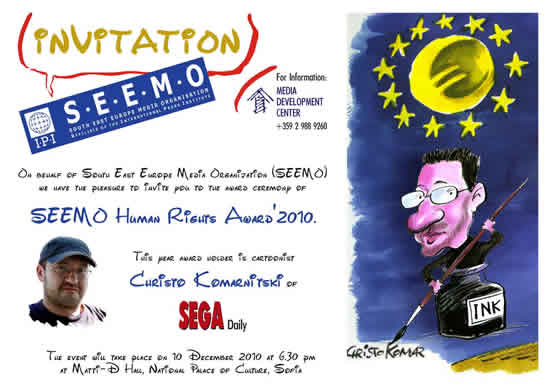 The South and East Europe Media Organisation (SEEMO), a network of editors, media executives and leading journalists in South East and Central Europe and an affiliate of the International Press institute (IPI), is pleased to announce that after careful deliberation the SEEMO Jury – composed of SEEMO Board members – has awarded the “SEEMO Human Rights Award 2010” to Christo Komarnitski, a political cartoonist for the Bulgarian daily newspaper Sega (Now) and for weeklies Sofia echo and Starshel (Hornet). 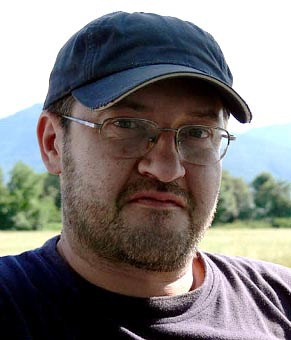 Komarnitski was born on 30 May in 1964 in Gabrovo, a town in the central part of Bulgaria.

Since 1997, Komarnitski has been working as a political cartoonist for the Bulgarian daily newspaper Sega (Now) and for weeklies Sofia echo and Starshel (Hornet). Komarnitski contributes regularly to the Cagle Cartoons Syndicate and many other periodicals.

“Very often a human rights defender can say much more with a single picture or cartoon than with tones of words. Thank goodness, we are not facing wars because of cartoons, but right now some cartoons are more precious and more worthy than many diplomatic interventions,” said Milena Dimitrova, SEEMO Board Member. For Oliver Vujovic, SEEMO Secretary General “a good cartoonist is like a good journalist”, and “we should not forget that very often cartoonists are subjected to the same kind of pressure as journalists. SEEMO has, on a number of occasions in recent years, reacted in cases in South, East and Central Europe when local cartoonists have been pressured by the state or a religion organisation”.

The “SEEMO Human Rights Award” is an annual award dedicated to International Human Rights Day on 10 December. SEEMO has been presenting the Award since 2002.
In 2002, Christine von Kohl (died 2009), founder of the Vienna-based Balkan – ” Südosteuropäischer Dialog ” magazine, received the award. In 2003, the recipient was Nebojsa Popov, founder of the Belgrade-based magazine “Republika”. Fatos Lubonja, an Albanian author, received the award in 2004. Abdulhalim Dede, a journalist and member of the Turkish-Muslim minority living and working in Western Thrace, Greece, was the 2006 recipient. Seki Radoncic, from Montenegro, author of the book, ” The Fatal Freedom, ” and active in investigating war crimes in the former Yugoslavia, received the award in 2007. The award winner in 2008 was Spomenka Hribar, a Slovenian journalist, writer and human rights advocate. Pavol Demes, an internationally recognised NGO leader and the director of the Slovakia office of the German Marshall Fund of the United States (GMF) was the award winner in 2009.

The SEEMO Human Rights Award 2010 will be presented to Christo Komarnitski on Friday, 10 December 2010, at 18:30 by Milena Dimitrova, SEEMO board member, and Oliver Vujovic, SEEMO Secretary General at Mati, – D hall of the National Palace of Culture, 1 Bulgaria Square, Sofia 1463 in Bulgaria. To take part in this ceremony, please contact Mirjana Milosevic – E-mail:info@seemo.org or by phone: +43 1 512 90 11 12.