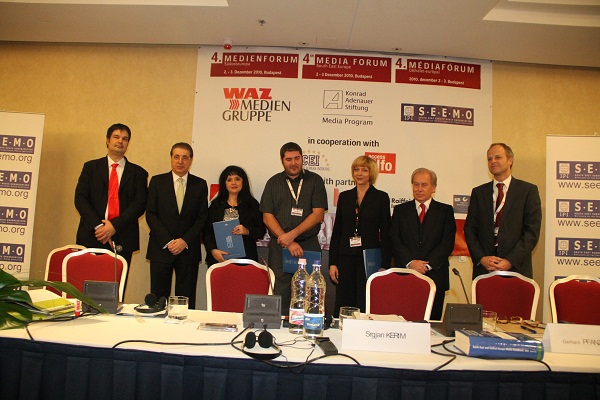 BACKGROUND
The Central European Initiative (www.ceinet.org ) has traditionally paid particular attention to the area of information and media and encouraged the role of independent media in its Member States. In view of the difficult conditions under which journalists are frequently exercising their profession the CEI, in cooperation with the Vienna-based South East Europe Media Organisation (SEEMO), promotes the CEI SEEMO Award for Outstanding Merits in Journalism, which since its first edition in 2008 was meant to honour a journalist who, through his/her work, highly contributed to investigative reporting.

Criteria for admission
The Award is open to nationals of CEI Member States (Albania, Austria, Belarus, Bosnia and Herzegovina, Bulgaria, Croatia, the Czech Republic, Hungary, Italy, Macedonia, Moldova, Montenegro, Poland, Romania, Serbia, Slovakia, Slovenia and Ukraine) who have acquired in the last three years special merits in investigative journalism and who are still active in journalism. The competing journalists should be nominated by individuals/organisations/media companies. Self-nominations are not allowed. All media are accepted: print, broadcast, news agency or Internet.

AWARD
The winning candidate will receive an award of 5.000 EUR, offered by the CEI – Executive Secretariat, on the occasion of the CEI Journalists’ Forum to be held in Poland in September/October 2010. The winner will be invited to attend the Forum and his/her participation expenses will be covered by the CEI.

Terms of participation
Applications should include the following documentation: 1.Filled in Application Form (here) 2.Curriculum Vitae of the candidate 3.Summary of the presentations of the candidate’s merits; details of the media which published / broadcasted the reports 4. Relevant supporting material about the candidate (TV reports on DVD, audio reports on CD, copies of articles in print media). Reports in local languages should be possibly accompanied by a brief English translation. Please note that supporting material cannot be returned, therefore you are kindly invited to send copies of the original materials.