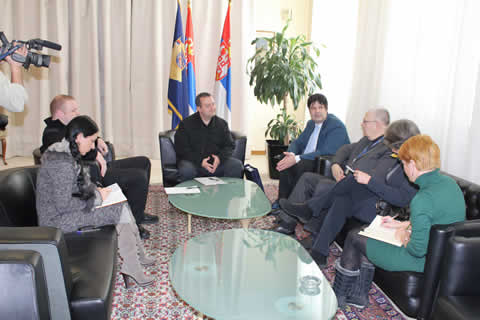 Ivica Dacic, Serbian First Deputy Prime Minister and Minister of the Interior in a meeting with SEEMO mission

According to the statistics by Serbia’s Ministry of Interior, attacks on journalists in the country have decreased in the past two years. In 2010, there were seven recorded attacks against journalists. In 2011, three cases of threats to journalists’ safety were recorded. The police had solved all of the above-mentioned cases, Serbia’s Minister of the Interior, Ivica Dacic, said during a recent meeting with a delegation of the Vienna-based South East Europe Media Organisation (SEEMO), headed by Oliver Vujovic, SEEMO Secretary General. The meeting took place at the Ministry’s headquarters in Belgrade, Serbia.

During the meeting, SEEMO, an affiliate of the International Press Institute (IPI), reminded Dacic that the murders of three journalists – Dada Vujasinovic in 1994, Slavko Curuvija in 1999 and Milan Pantic in 2001 – were still unsolved. Neither the perpetrators nor the masterminds have been arrested. Dacic assured the delegation that the police would re-examine these cases and determine whether there have been any new developments that need to be considered. He said that all the material related to these cases had been delivered to the prosecution, but “it does not mean that the material suffices to press charges.” In other words, there may not be enough conclusive evidence.

Currently, five journalists in Serbia, all specialised in reporting on corruption, have been given 24-hour police protection by the Ministry of the Interior. While SEEMO praises the Ministry for providing protection, it expresses concern at the fact that police have been unable to eliminate the sources of threat, which come mostly from mafia-like organisations.

Since all protected journalists continue to work and travel, their protection abroad is of particular concern. Every country has its own laws regarding the allowance of armed policemen on their territory, said Dacic, who explained that Serbian policemen cannot travel abroad with their licensed weapons in order to protect journalists. Some countries maintain that journalists are not in any danger on their territory. Dacic and Vujovic agreed that threats persist even beyond Serbia’s borders.

Considering that international criminal organisations have cross-border networks, threatened journalists are not safe once they leave their country’s borders. Vujovic therefore proposed an international initiative, aimed at improving police cooperation. “We would like to ask international police authorities, starting with the countries in South East Europe, to cooperate better and to respect the analyses made by their colleagues. If journalists need police protection in one country, they need the same form of protection beyond their country’s borders. This initiative may involve legal changes. Some form of cooperation has to be found in order to protect threatened journalists. Living with police protection is not easy and it is even worse when travelling without it in the knowledge that your life is in danger,” Vujovic said.