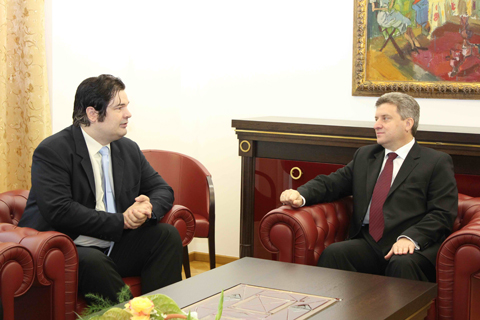 Gjorge Ivanov, President of the Republic of Macedonia (FYROM) and Oliver Vujovic

The Vienna-based South East Europe Media Organisation (SEEMO), an affiliate of the International Press Institute (IPI), will visit the Republic of Macedonia (FYROM) from 4-6 October 2011. The purpose of the visit to is to acquire a better understanding of the media situation in the country. During the past years, and especially since the beginning of 2011, SEEMO has received complaints regarding political and economic pressure on media outlets. SEEMO, a leading regional media organisation of editors-in-chief, media owners, media CEOs and prominent journalists in South, East and Central Europe, defends press freedom and promotes quality journalism. The seven-member delegation will meet the country´s President, Gjorge Ivanov; Prime Minister Nikola Gruevski and his team; the Head of the OSCE Mission, Ralf Breth; Austrian Ambassador Alois Kraut; and more than 30 media representatives including owners, directors, editors-in chief, journalists, media experts, NGO representatives, and other professionals. The head of the SEEMO delegation is Oliver Vujovic, SEEMO Secretary General. SEEMO will publish a report after the mission.

The Vienna-based South East Europe Media Organisation (SEEMO), an affiliate of the International Press Institute (IPI), on Wednesday released its report on the media situation in the Republic of Macedonia/Former Yugoslav Republic of Macedonia. The SEEMO-led press-freedom mission visited Skopje, the country’s capital, from 4 to 6 October 2011.

The objective of the press freedom mission was to assess the media situation following a series of media closures, regulation changes and protests.

SEEMO found that the media environment was partially free. All media professionals interviewed by the SEEMO delegation spoke of political, economic and legal pressure on media that induced self-censorship. Nobody denied that some journalists were involved in illegal practices, like blackmailing businessmen or striking lucrative deals. Everyone pointed to low professional standards, and many underlined the lack of ethics. Most agreed on the prevalence of extortive practices and blackmailing on all sides. Everyone agreed that society was divided. While the pro-government supporters argued that laws were finally being enforced, critics perceived the very same legal actions as selective, politically motivated, and designed to stifle media freedom.

The report recommends non-selective implementation of laws and regulations, transparency of government-sponsored media campaigns, guaranteeing of the independence of regulatory bodies, ensuring of proper functioning of the public broadcaster, and respect for ethical and professional standards.

The European Commission and international media watchdogs should continue to monitor the situation and ensure that international media standards are met. However, that pressure should be sustained and consistent, rather than ad hoc. Occasional protests are perceived as politically selective and imbalanced.

International donors and institutions should provide technical assistance and support for the local initiatives designed to overcome the current political divisions and create a stable and free media environment, in which rules are respected and illegal practices eliminated. In addition, defamation should be decriminalised while libel laws should be amended in order to avoid disproportionally elevated fines.

Media Reports about the SEEMO Press Freedom visit to Macedonia