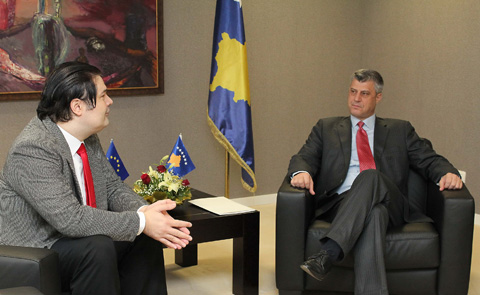 The Vienna-based South East Europe Media Organisation (SEEMO), an affiliate of the International Press Institute (IPI), will visit Kosovo from 23 to 25 November 2011.

The purpose of the visit to is to acquire a better understanding of the media situation in Kosovo. During the past years, SEEMO has received complaints regarding political and economic pressure on media outlets.

The head of the SEEMO delegation is Oliver Vujovic, SEEMO Secretary-General..

The Vienna-based South East Europe Media Organisation (SEEMO), an affiliate of the International Press Institute (IPI), on Wednesday released its report on the media situation in Kosovo. A SEEMO-led press freedom mission delegation visited Pristina, Kosovo’s capital, from November 23 to 25 2011.

The objective of the press freedom mission was to assess media developments in Kosovo, following reports of pressure on media. The Kosovo media landscape has changed dramatically during the past 20 years. As part of former Yugoslavia, Kosovo had only a few state-sponsored media and one state television. After the disintegration of Yugoslavia, the Kosovo media market expanded exponentially: numerous newspapers and television and radio channels have been created. They are currently competing to survive in the crisis-stricken market of 1, 8 million people.

The Kosovo media market is crowded with numerous print and electronic media that may not survive economic challenges.

Albanian and Serbian-language media reflect the divisions between Pristina and Belgrade related to the unresolved political status of Kosovo. Media communities have not contributed to reconciling Albanians and Serbs: with some exceptions, they usually address parallel issues of parallel societies. Most abstain from hate speech.

According to most interviewees, media outlets are subject to political and business pressure. In the case of the Albanian-language media, pressure stems from different sources, mainly the government and political parties, but also from business leaders and some international representatives. In the case of the Serbian-language media, pressures are divided: some stem from internal struggles, while others come from Belgrade political representatives. Serbian- language media that try to overcome these divisions are also partially isolated from mainstream society: most Serbian journalists do not speak Albanian.

The lack of democratic traditions, as well as the lack of understanding of the role of independent media, combined with general fear of expressing one’s opinion, curtail the efforts of those reporters who try to conduct professional investigations. Some attacks on journalists occur because of the lack of understanding of their role. In that respect, government and its institutions have failed to communicate properly, and/or train different officials as to the rights of access to information.

On the other hand, different international agencies that have played a crucial role in fostering the establishment of the legal basis for the functioning of independent media, are presently perceived as supporters of institutions rather than promoters of freedom of expression.

The process of democratisation is a long-term project and international pressure and influence cannot be substitute for the political will of the local authorities to transform their democratic rhetoric into concrete actions.

To Kosovo Authorities: Guarantee freedom of expression through actions rather than declarations; implement the law on public broadcasting and ensure that Radio Television Kosovo ( RTK) functions as a public rather than a state broadcaster; decriminalise defamation and libel; improve and professionalise the communication departments of ministries and other public institutions; organise capacity building for civil servants and explain the role of media in democratic societies; implement and respect all media-related laws; and abstain from pressuring the media, directly or indirectly.

To the International Community: Monitor and ensure that government fulfils all of its obligations related to respect for freedom of expression and media freedom; monitor and ensure that all media-related laws are implemented; abstain from pressuring the media, and organise training and workshops for journalists as a long-term project, respecting local necessities.