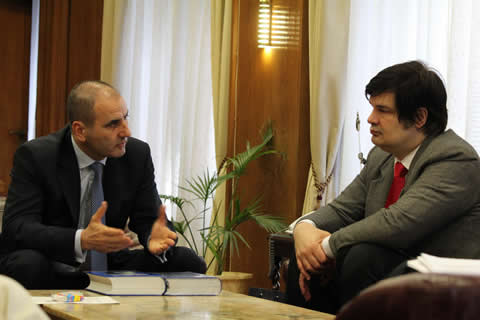 The Vienna-based South East Europe Media Organisation (SEEMO), an affiliate of the International Press Institute (IPI), will visit Bulgaria from 2 to 3 April 2012.

The purpose of the visit to is to acquire a better understanding of the media situation in the country. In recent years, SEEMO has received complaints regarding pressure on media outlets. In addition, as SEEMO has reported, there have been physical attacks on journalists and media property.

The seven-member delegation will meet Minister of the Interior Tzvetan Tzvetanov and more than 25 media representatives including owners, directors, editors-in chief, journalists, media experts, NGO representatives, and other professionals.

The head of the mission is Oliver Vujovic, SEEMO Secretary General.

The Vienna-based South East Europe Media Organisation (SEEMO) conducted a mission to Sofia, Bulgaria, from April 1 to 4, 2012 in order to assess the latest media developments in the light of changed media ownership and reports of pressure on media. The delegation met Bulgaria’s deputy prime minister and minister of interior, Tzvetan Tzvetanov, as well as over 25 editors-in-chief, leading journalists, media experts and NGO representatives.

The Bulgarian media scene has been profoundly transformed during the past three years, since the German-based media group Westdeutsche Allgemeine Zeitung (WAZ) retreated from the country’s market in 2010. Media Group Bulgaria Holding has bought WAZ publications. On the other hand, the New Bulgarian Media Group began acquiring numerous publications in 2007. Both groups own numerous media outlets and control a large share of the print market. While the former appears to be associated with the pharmaceutical industry, among other business interests, the latter is reportedly related to one government-trusted bank. These two media conglomerates fight for the market and for influence. According to some interlocutors, the country’s top political leadership had to intervene in order to stop their public war. When asked about the missions or ideology of the two media groups, interviewees responded unequivocally: “There is no ideology. It is about business and personal interests.” Their rivalry split the publishers union. Currently there are two publishers’ unions.

Respecting the business interests of media owners and silencing any information that may be interpreted as harmful is widely accepted by most reporters as a way of doing journalism. Even independent media, valued for their intellectual content, and unrelated to the above-mentioned groups, abstain from addressing those economic areas where their owners are active. For example, if an owner is in the oil business, one abstains from writing in-depth articles about energy.

Foreign media ownership is perceived as advantageous for media outlets and journalists. Foreign owners are perceived as credible, long-term thinking and generally absent from day to day editorial decisions.

Bulgarian media owners, on the other hand, with less than two decades of capitalist experience, are perceived as investors with short-term vision who strive for immediate profits.

This business model has influenced the quality of media: most dailies have become tabloids.

Business and personal interests determine what journalists can write or how they can deal with specific issues or political figures. One editor said: “A journalist who came to work for us from another newspaper asked me if we should write good or bad things about a particular politician. He told me that his previous employer had strict instructions regarding politicians. You were not allowed to write anything about certain politicians. About others you had to write only positive stories. As for the third group, negative coverage was advised.”

This perception of media freedom and journalism implies that readers (and viewers) cannot rely on one specific media outlet to acquire information in the public interest. They are required to read different papers, watch different TV channels and switch between the only two radio stations (one private and one public) that produce news and programs, or opt for online media.

“Corporate journalism” as it is called in Bulgaria undermines the credibility of most media and creates distrust among journalists (perceived as followers of a particular media group). The economic crisis coupled with diminishing advertisement expenditures has affected most outlets. However, the two big media groups can keep covering losses in their media outlets since they generate profits in other business. Those who live off media business face serious challenges. In fact, reporters leave small quality publications for the better paid corporate journalism posts.

Last but not least, SEEMO has observed that Bulgarian journalists fail to address certain topics related to diversity: gender and gender violence, homophobia, ethnic and religious minorities, to mention several. These issues are addressed occasionally, if there is a particular incident, generally negative, that triggers coverage. Bulgarian society and the political arena have not started debating these social topics, which top the EU’s policy agenda in other countries.