From 18-21 June 2019, we undertook an international freedom of expression mission to Albania, comprised of the European Centre for Press and Media Freedom (ECPMF), ARTICLE 19, the Committee to Protect Journalists (CPJ), the European Federation of Journalists (EFJ), the International Press Institute (IPI), Reporters Without Borders (RSF) and the South East Europe Media Organisation (SEEMO). The mission sought to gather information about challenges to freedom of expression and press freedom in Albania and bring concerns directly to Albanian government representatives. 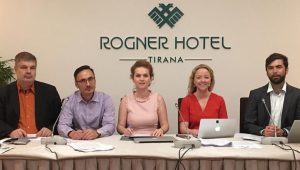 We met with journalists; editors-in-chief; representatives of civil society, international organisations and foreign embassies present in Tirana; and senior government officials, including Albanian Prime Minister Edi Rama. The mayor of Tirana, Erion Veliaj, refused to meet with the delegation. We appreciated the possibility to meet with a wide range of stakeholders who provided insight on the press freedom situation in Albania.
The delegation found that press freedom in Albania is deteriorating. Recent physical attacks against journalists have gone unresolved. Top public officials regularly use language that belittles and smears critical journalists. The public administration, including the office of the prime minister and the mayor of Tirana, are not transparent in their interactions with the media and restrict access to critical journalists. Recently proposed media-related legislation, including a draconian regulation scheme for Albanian and foreign online media outlets, is not in line with international human rights standards.
We are concerned that Albania, a democracy, a member State of the Council of Europe and the Organization for Security and Co-operation in Europe (OSCE), and a candidate country for the European Union, is not living up to its obligations to guarantee and safeguard freedom of expression and press freedom as required under Albanian law and international instruments including the European Convention on Human Rights.

The coalition is deeply concerned by the Albanian government’s December 2018 proposed amendments to the country’s media legislation which would introduce mandatory registration requirements for online media and create an administrative body with the power to fine and shut down online media and block foreign online media without a court order. We consider that these measures attempt to introduce state regulation of online media, which is contrary to international best practices on self-regulation and would have a detrimental impact on freedom of expression and information and press freedom in Albania.
In our meeting with the prime minister, he informed us that a new updated draft of the amendments will shortly be made public following international criticism. He stated that in the next draft of the law, the possibility of shutdowns will be eliminated and fines will be much lower than provided for in the first draft. We welcome these changes and recall international human rights standards that “states should not impose mandatory registration to online media as a precondition for their work as this can have a very negative effect on media freedom.” The government should ensure that this legislation is fully in line with OSCE, Council of Europe and EU best practice.
We are also concerned about the ongoing lack of transparency regarding consultation on the draft law, which was introduced over the Christmas holiday period and given an extremely short consultation period. We urge the government of Albania to ensure that a meaningful consultation process with journalists and civil society is undertaken with the next draft of the amendments.

The delegation expressed concern about what journalists described as a rising number of politically motivated defamation cases against journalists filed by politicians, often requesting disproportionate sums in damages. Such claims can have a serious chilling effect on journalists. The delegation notes positive reports that Albanian courts increasingly apply European Court of Human Rights standards to defamation cases.
Although prison sentences for defamation were repealed in 2012, defamation and insult remain criminal offences punished by a criminal fine, and recent years have seen proposals to reintroduce criminal laws against defaming top state officials. Even without the threat of jail sentences, the potential of facing a criminal conviction for their work can lead journalists to practice self-censorship. We strongly recommend Albania to fully repeal all criminal defamation and insult laws.
For his part, Prime Minister Rama committed to considering the possibility of fully repealing criminal defamation laws. He said he personally would not use criminal law against journalists but would continue to bring civil defamation cases against journalists in “extreme” cases.

The delegation was informed during its interviews with stakeholders that various cases of physical attacks and serious threats against journalists in relation to their reporting remain unresolved by authorities. Recently, journalists were injured during anti-government protests. Investigative journalists have been harassed or fired because of their reporting, in some cases following suspected intervention of ruling party politicians. In some cases, journalists decide to not report threats and attacks to relevant authorities and not to inform the public. In addition, there are cases in which journalists revoke charges against their suspected perpetrators out of fear of further reprisals. The delegation was informed that authorities did not fully follow up on cases, and did not investigate the motives behind the threats and attacks. We are concerned that authorities fail to fully investigate the threats and attacks against journalists, thus contributing to an atmosphere of impunity, which might embolden perpetrators to commit similar attacks and intimidate journalists into silence. We are also concerned that authorities fail to ensure the safety of journalists covering protests.

During meetings with journalists, the delegation was informed that Prime Minister Rama constantly refers to them as “trash bins” (“kazan” in Albanian). Likewise, the leader of the opposition, Lulzim Basha, refers to media as “captured and bought”. Such language denigrates journalists and makes them appear to be a legitimate target for aggression in the eyes of the public, increasing the risk of threats or violence against them. The journalists we met with stated that when Prime Minister Rama calls them “kazan”, this results in immediate online harassment against journalists from members of the public using the same wording of the prime minister and sometimes even harsher language and threats. We are alarmed by such smears and propaganda-like language used by political leaders and other politicians against journalists. The delegation raised this with Prime Minister Rama, who defended his use of language but committed not to call journalists trash bins (“kazan”) in the future.

The situation of access to information and government transparency in Albania appears to be mixed. On the one hand, Albania’s Access to Information Law is widely regarded as excellent, although implementation remains inadequate. State authorities continue to deny journalists access to documents of legitimate and essential public interest – especially those related to public contracts, bids and concessions – and use delaying tactics with the result that when journalists do finally receive information it is no longer relevant. However, both the Information and Data Protection Commissioner and the Albanian courts are playing an important role in confirming journalists’ right to access documents.
On the other hand, the delegation found widespread consensus among media stakeholders that the Albanian public administration restricts access to independent journalists and utilizes its own communications formats to bypass critical media and control the narrative. According to interviews with numerous stakeholders, the prime minister does not conduct regular press conferences. When such press conferences take place, only journalists working for media close to the government are permitted to ask questions. Cameras from media outlets are not permitted. Increasingly, the prime minister uses ERTV, his online TV channel, as his official portal for communicating with the public. During election campaigns such as the one currently taking place, journalists are prevented from covering campaign events and instead provided with prepared material that they are expected to use. The practice of imposing government-controlled video feed and other materials on media outlets greatly restricts journalists’ access to information and ability to give the public an independent perspective on the actions of those in power.
In a meeting with the delegation, Prime Minister Rama disagreed with the above findings, saying that he conducted press conferences “when necessary”, adding “We don’t make any kind of selection, we don’t say ‘you are in’ or ‘you are out’ — we invite and everyone is there”. He said that he was open to questions from all journalists and that he never denied anyone the ability to cover his election campaigns. He described ERTV merely as a “window” into the government’s activities.

Our mission confirmed that Albanian media ownership and advertising revenue remains highly concentrated in the hands of a few, family-owned groups, with a high degree of cross-sector ownership. This situation was previously highlighted by BIRN Albania and Reporters Without Borders. A previous law containing specific rules on ownership of television stations is no longer in the books.

• In accordance with Albania’s international obligations and commitments under the Council of Europe, the European Court of Human Rights and the OSCE, we urge the Government to eliminate any legislative provisions that would impose registration requirements and state regulation of online media, as well as the provisions giving regulators the power to suspend or block access to electronic publications and levy fines;
• Media legislation should be drafted in a transparent way, in close consultation with journalists and civil society organisations The prime minister, the leader of the opposition, and other politicians should immediately stop smear campaigns and discrediting rhetoric used against journalists and media professionals;
• Albanian politicians should organise regular press conferences and allow all journalists to ask questions and not discriminate them on the basis of their reporting. All journalists should have equal access to government/public information;
• We urge Albanian authorities to ensure the safety of journalists covering organized crime and corruption, increase their efficiency in fully and thoroughly investigating threats, smear campaigns and physical attacks against journalists, bringing those responsible to justice. The authorities should also ensure the safety of journalists covering protests.
• We encourage journalists and media professionals to report cases of attacks and threats to the partners of the Council of Europe Platform for the Protection of Journalism and Safety of Journalists, the OSCE Representative on Freedom of the Media, and freedom of expression NGOs;
• We encourage journalists and civil society within Albania to take measures to strengthen solidarity;
• We encourage journalists and media professionals in Albania to respect professional standards and strengthen self-regulation through membership in the Albanian Media Council;
• Lawmakers should pass amendments to secure the operational, financial and human resource independence of the Information and Data Protection Commissioner;
• Introduce effective measures to increase transparency and pluralism in media ownership. 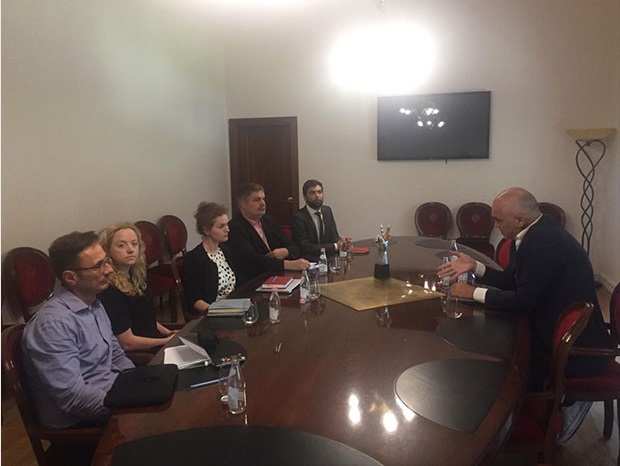