The International Press Institute (IPI) and the South East Europe Media Organisation (SEEMO) today expressed optimism about the possibility of defamation reform in Slovenia following statements of good will from key Slovenian officials. Justice Minister Goran Klemenčič, a former anti-corruption official, told a joint IPI/SEEMO delegation that he was “personally against” the application of criminal law in defamation cases and that “in the long run, we would like to see criminal sanctions [removed]”.

However, the minister cautioned that, in his view, a move to decriminalise defamation in Slovenia would have to be accompanied by the introduction of punitive damages in the country’s civil law. The current system, he said, which recognises restorative damages only, “does not present a justifiable remedy for [damage to] personality rights”.

The chair of the Justice Committee in the Slovenian National Assembly, Bojana Muršič, committed to opening parliamentary discussions on the issue of criminal defamation with a possible view toward “instigat[ing] the cancellation of the [defamation] provisions in the Criminal Code.” Her counterpart in the Culture Committee, Dragan Matić, emphasised his interest in maintaining a balance between freedom of expression and the protection of reputation, but stated that he was “willing to examine solutions in Parliament” and to “lend an ear” to any suggestions put forward by IPI and SEEMO.

IPI as well as a wide range of other international actors, including the U.N. Human Rights Committee, the Parliamentary Assembly of the Council of Europe and the Representative on Freedom of the Media of the Organization for Security and Co-operation in Europe, Opens external link in new windowhave called for states to decriminalise defamation, pointing to the potential for media self-censorship that may arise from the threat of criminal sanctions. In Opens external link in new windowrecent coverage on its website, IPI has highlighted examples of the abuse of defamation laws in Europe and its practical impact on journalists.

Both IPI and SEEMO underscored to officials the fact that Slovenia had fallen behind its neighbours in terms of criminal defamation. While the Slovenian Criminal Code maintains five separate defamation-related offences all punishable with at least six months in prison, fellow former Yugoslav states Bosnia and Herzegovina, the Former Yugoslav Republic of Macedonia (FYROM)/Republic of Macedonia, Montenegro and Serbia have already repealed criminal defamation provisions and Croatia has abolished the possibility of imprisonment. Even Italy, the only EU state that continues to sentence journalists to prison for defamation, is Opens external link in new windowcurrently debating a bill to remove its prison provisions.

“We were very encouraged to hear from parliamentarians and officials alike in Slovenia that they are open to considering making defamation a matter for civil law only,” said IPI Executive Board Member George Brock, who led the delegation. “This change would be better for the protection of free expression and follow the trend across the rest of Europe.”

Delegation member Christian Zarm, president of the German Press Association and vice-president of IPI’s German National Committee added: “Importantly, given the context, IPI also sensitised Slovenian MPs to the potential future misuse of laws that may not currently create problems in practice.”.

While the delegation’s two-day visit to Ljubljana was primarily focused on defamation, members communicated to the Slovenian government their deep concern regarding prosecution of Delo investigative journalist Anuška Delić on charges of publishing classified intelligence. The case – which will enter its main trial phase in January – has spurred calls to restore a clause to the Criminal Code providing broad exemptions from liability for such disclosures, including disclosures made in the public interest. The clause was removed in 2008 under former Prime Minister Janez Janša, whose stance toward the media was frequently combative, according to media and civil-society observers. Most of the officials with whom IPI and SEEMO met declined to comment on the Delić case specifically, citing the ongoing judicial process. Minister Klemenčič did, however, indicate that the government was planning to table a bill that would protect the publication of classified material in the public interest, although the bill apparently would not protect the act of leaking information itself.

Anton Peršak, state secretary in the Ministry of Culture and a former president of PEN Slovenia, offered a clearer position on the matter: “Our ministry believes that we have to support her [Delić].” If convicted, Delić faces up to three years behind bars.

“IPI remains highly sceptical of the charges against Anuška Delić,” said IPI Deputy Director Barbara Trionfi. “Prosecuting a journalist for doing her job – reporting on matters of public interest – is out of place in any democratic society, and entirely unacceptable in an EU member state. We repeat our call for the case against her to be dropped without delay.”

While Slovenia continues to boast a high number of daily print media for a relatively small market, journalists, civil society and government officials alike pointed to the current economic crisis as the single biggest threat to independent journalism in the country. Peršak estimated that as many as 90 percent of journalists were working under “precarious” financial conditions, especially younger journalists.

Another issue brought frequently to the delegation’s attention was what was described as an opaque, constantly fluctuating situation of media ownership. One observer described the situation, in which it is often unclear to some journalists who owns the media outlet that employs them, as “degrading” to the status of journalism in the country. 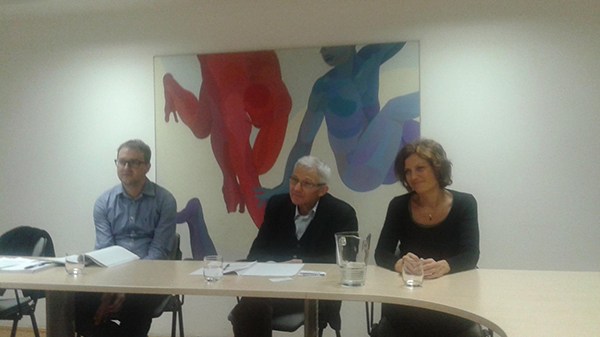 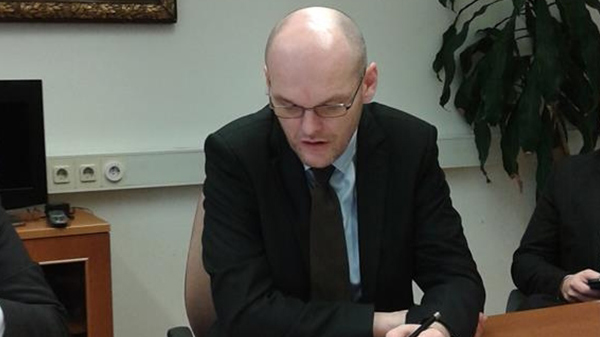 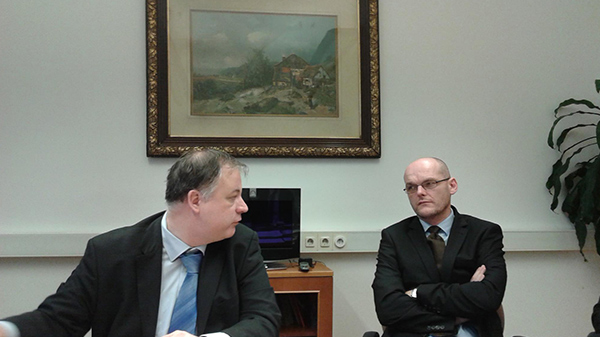 SEEMO Mission Meeting with the Minister of Justice of Slovenia, Goran Klemenčič, and his staff advisor, Ljubljana, November 2014 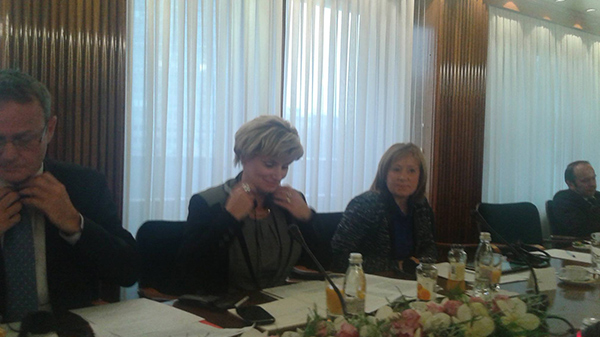