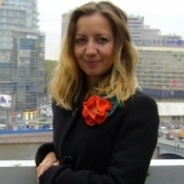 CIME consultant Yaroslava is Editor of the TV Channel ‘100 TV’. As an independent company 100 TV is able to cover a wide range of news stories using commentary from a broad range of sources. At the time of the 2006 Fellowship Programme Yaroslava was News Editor of 100 TV, having since been promoted to the position of Editor. Being an Editor, Yaroslava does her best to cover news and events from different angles, using the commentary of experts and other sources. In her everyday work she tries to keep the balance among news that concerns politics, economics, and the social and cultural life of the city. Yaroslava is also a Board Member of the Association of Young Journalists of North West Russia, the “Neva Press Club”.

The situation with media freedom in Belorussia currently and like already during the years hardly depends on political regime and its rules.

Local journalists say that with time passing by many of Belorussian audience may start to think that situation can’t be different and nothing is too wrong with it. Though those that are able to travel abroad and get a fresh sight to things realize how much ridiculous many things, including the media freedom, are.

The print media are divided into official and independent, that are just few, like “BelGazeta” (http://www.belgazeta.by/www.belgazeta.by), “KP-Belorussia”, “Nasha Niva” (www.nn.by). They provide the more or less balanced information with diverse points of view, keep it with no propaganda or contr-propaganda. Though they survive hard, especially economically, as, for example, in the country there is only one paper factory where all newspapers have to buy paper – during last year the price raised up 3 times higher – independent media had to buy the paper on stock-exchange, while pro-governmental press had fixed in year-long agreements price. Plus to this in 2011 pro-governmental press was supported with 54 million euro from the budget.

Among regional newspapers “Vechernij Brest” (www.vb.by) is maybe not perfect, but one of the most brave and balanced, they dare to criticize not only “main figure”, which is President, but also couple of local authorities in power.

When it comes to television it is totally official, there are no not-pro-governmental tv-channels. The same is about radio: on-air there are only FM-stations that provide music and entertainment.

When it comes to internet media, civil journalism there are several most respected and popular active bloggers as well as resources – www.naviny.by and charter97.org, bloggers Malishevskij, Lipkovich, Feduta and some others. In 2011 many of active civil journalists were undertaken for criminal cases, their sites were closed as extremists’ ones. Some of them had to leave Belorussia. There is a list on certain media web-sites that is filtered and forbidden to open in governmental organizations, educational and cultural ones. During 2011 the list grown up to 60 forbidden web-sites.

Last year there were 150 cases of journalists’ arrests, 7 from them were attacked physically. While demonstrations and civil actions journalists were arrested cruelly, professional equipment were broken, 22 journalists came through courts, 13 got administrative prosecution, others were assigned to pay fines.

Another noticeable growing trend is building “unofficial” black lists of musicians, writers, actors, artists – local and international – that are forbidden for entering the country as they demonstrated support to belorussian political prisoners. In the list such people as Russian band DDT (leaded with proactive singer), Pet Shop Boys, writer Edward Uspenskij, Andrej Bitov, dramatist Tom Stoppard, actor Jude Law, Kevin Spacey and others. Their names are also forbidden to be mentioned on TV and FM radios. The reason of being included in the list is not even participation in protest action, but only expressing the opinion on Belorussian
So at the moment the media filed is under big pressure that includes not only censorship, but also tough methods as criminal prosecution, economical pressure, violence during covering civil protest action, administrative arrests, stopping of press units activity, attempts to restrict word freedom in internet.