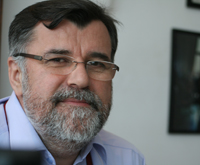 Veran Matic (2012)
President of the Board of Directors RTV B92,
Belgrade, Serbia

I had been following years-long trial of Orhan Pamuk charged with „insulting Turkishness“. I sighed with relief when the criminal charges were dropped, but this was a bitter-sweet victory after the demonization of the Nobel laureate.
It was clear, however, if many things were not changed in the Criminal Code, criminal prosecution of journalists and free-thinking people would persist. Indeed, anyone could be charged and punished under such loose legal provisions in Turkey.
Ultimately, personal damages claims were brought by „injured“ families against Mr. Pamuk for the same ’offence’ – for his remarks about Armenian and Kurdish deaths for which he had been previously accused under the Criminal Code. The Nobel laureate was fined in late March this year and ordered to pay about $4,000.
And yet, parallel to this, a series of frightening prison sentences were handed down to journalists from all sorts of media outlets – mainstream and independent, small and big ones, tabloids…
Anti-terror laws in the country have led to a situation where Turkey ranks first in terms of the number of journalists languishing in prisons. Turkey is also ‘a world champion’ when it comes to the number of trials of journalists as well as hefty fines imposed on them.
This appears to be a part of an overall trend to stifle independent voices when we take into account constraints imposed on online and e-mail communication, and filtering of web sites. Apparently, fighting against terrorism serves as an alibi for increasing repression.
B92, the media outlet which I run, was banned four times during the Milosevic’s reign. The old authoritarian regime would always cite some legal provision as an excuse for banning the station, which, as a rule, did not have anything to do with the Public Information Act. Once they even claimed that they had not actually banned B92 but that ‘rain water penetrated transmitter’s coaxial cables’.
Autocratic regimes typically endeavour to lay down very loose rules of the game which could be easily bend to their interpretations so that they could exert control the media scene in many different ways.
It is incomprehensible to me that there are over 60 journalists languishing in prison today in Europe, including a World Press Freedom Hero. It is baffling that many exceptional journalists and editors have been murdered, that they are being attacked, that the very existence of many media outlets is threatened.
Our colleagues in Turkey are waging a very important battle for freedom of expression in this country which aspires to join the family of European democracies in the European Union. Response and a show of solidarity of colleagues worldwide have not been satisfactory so far.
Individual reactions on the part of various associations and institutions would not suffice. International organisations have not as yet shown determination to oppose this wave of violence which is undermining one of the fundamental pillars of every democracy – freedom of speech. They have failed so far to protect the journalists and the media from outrageous accusations, non-transparent judicial proceedings and violations of the right to defend oneself.
It is necessary that all the media organisations rally round to help our colleagues and their media by way of setting up a committee of reputable journalists and editors with a clear objective to pursue every possible legal avenue to amend the laws and practice in Turkey, and thus set free innocent journalists, make their persecution cease and enable normal online communication in this country.