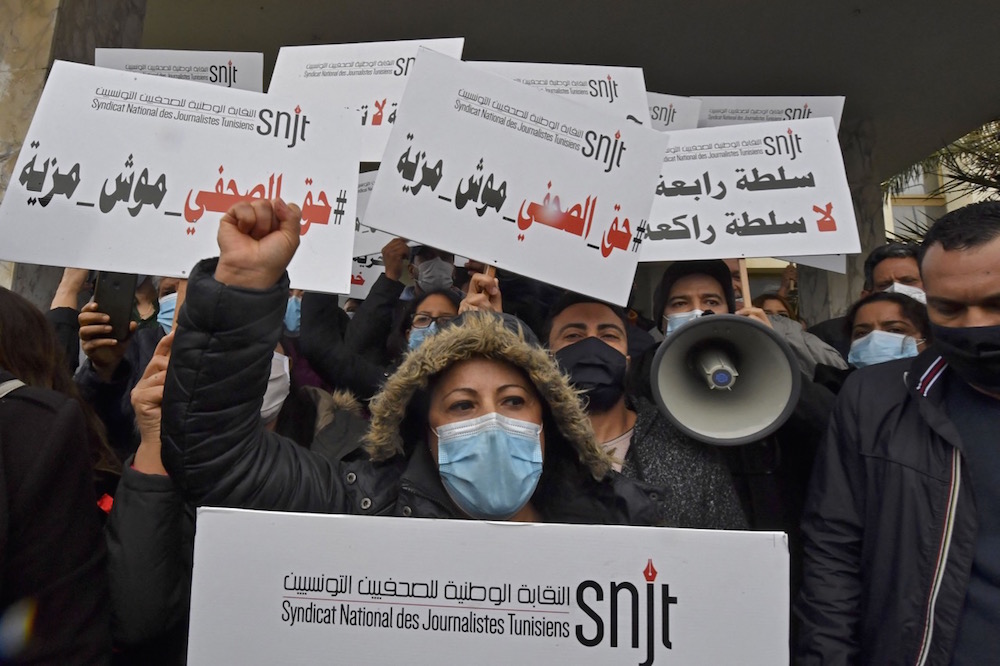 Journalists hold up signs reading in Arabic “fourth estate, not kneeling estate” and “journalists’ rights are not privileges”, as they demonstrate outside the headquarters of the Tunis Africa Press (TAP) news agency, in Tunis, 15 April 2021, FETHI BELAID/AFP via Getty Images

A number of IFEX members join rights groups in welcoming the Tunisian government’s decision to rescind a controversial appointment to the country’s national news agency, Tunis Africa Press (TAP), and call on those who ordered a police attack on the agency’s journalists during a peaceful sit-in to be held accountable.

The undersigned NGOs welcome the Tunisian government’s decision to withdraw its nomination of a controversial political appointment as director general of the country’s national news agency, Tunis Africa Press (TAP), and express their support to Tunisians’ right to independent public media, committed to ethical journalism. They strongly condemn, however, the 13 April police attack on the headquarters of TAP in Tunis, during which a number of its journalists and employees were assaulted while taking part in a peaceful sit-in.

TAP journalists had been protesting the prime minister’s nomination, which the government officially withdrew on 19 April, allegedly following the “resignation” of its nominee, Kamel Ben Younes. His nomination had prompted a wave of protests among journalists and civil society groups, including denunciation by 39 local NGOs on 8 April 2021.

TAP journalists and employees ended their sit-in following the withdrawal announcement after previously emphasizing in a 6 April press release, their “outright refusal to deal” with Ben Younes as director general, due to his involvement, prior to 2011, in “violations of freedom of expression and of the press, and of union activities, and for political propaganda, benefitting the Ben Ali regime, and his current allegiance to the Ennahdha Islamic party,” which has been in power over the past ten years.

The undersigned organisations consider the police raid on this public media outlet a dangerous precedent, unseen under previous autocratic rulers; and a crime that cannot be tolerated in countries that respect human rights, especially the right to freedom of expression and a free press. They demand that those who ordered the police incursion into the premises of TAP and the assault of its journalists and employees, be brought to justice.

Furthermore, the signatory organisations believe that Prime Minister Hichem Mechichi’s initial decision to appoint journalist Kamel Ben Younes as director general of TAP, succeeding journalist Mouna Mtibaa, who was known for her independence and commitment to ethical journalism, runs counter to recommendations and proposals presented since 2011 that call for public media reform. In addition, public media organisations in Tunisia continue to be governed by laws violating international standards for freedom of expression, dating back to the autocratic regime toppled in 2011.

On the other hand, the below organisations express their satisfaction at the government’s announcement made in parallel to its decision regarding the deputy director general of TAP to also withdraw its decision to appoint controversial journalist Hanan Ftouhi as director of Radioo Shems FM, owned prior to 2011 by one of former President Zine El Abidine Ben Ali’s daughters.

Regardless of these positive developments, the prime minister’s attempts to make appointments seen as favourable to political allies proves once again, a lack of political will to enhance the quality of pubic media and media expropriated from the family of the previous autocratic ruler, in cooperation with professional and civil society groups that have consistently defended the right to public media free from the grip of political power and financial pressure groups in support of Tunisia’s difficult walk towards democracy.

The undersigned NGOs warn the head of the government against the risk of taking arbitrary decisions, and call on him to stop rewarding political parties that back him by allowing them to exert their undue influence on public media and other State institutions.

We demand the elaboration, in a participatory manner, of objective criteria, based on competence, independence and transparency, in order to end political appointments, likely to turn public media into partisan and government media. Such practices violate the values of pluralism in democratic countries, as well as international standards for Freedom of Expression that the Tunisian government is obligated to uphold.