The South East Europe Media Organisation (SEEMO) is shocked to learn of the death of Jan Kuciak, a 27-year-old Slovakian reporter working for “Aktuality.sk” (publisher Axel Springer) and his partner Martina Kusnirova. The bodies were found on 25 February 2018 at their home in Velka Maca (Veľká Mača), in south-west Slovakia, some 60 km from the Slovak capital Bratislava. Slovakian police launched a murder probe.

Kuciak, born on 17 May 1990, worked on corruption cases, as also on allegations of tax evasion and connections between businessmen and top-level Slovak politicians. Kuciak had also been working on an investigation that delved into the infiltration into Slovakia of the Calabrian mafia. His last story on 9 February reported about a businessman known for his real estate deals.

“I am shocked by this sad news. This murder is a clear step against investigative journalism and press freedom. We call the authorities for a transperent investigation”, said SEEMO Secretary General Oliver Vujovic.

Kuciak is the first journalist ever to be killed in Slovakia.

SEEMO is a network of editors, media executives and leading journalists in South, East and Central Europe. 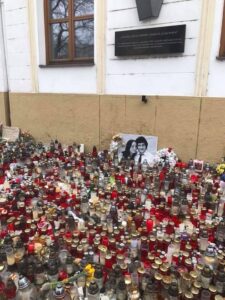