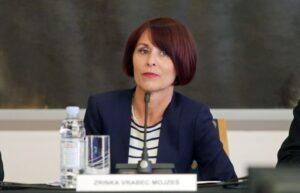 SEEMO: In the past, when you worked as a journalist, you experienced constant threats, intimidating phone calls and pressures. Please explain in more detail what the reason behind these attacks was. What exactly happened?
Zrinka Vrabec Mojzeš: During the 1990s, and even after the year 2000, intimidations, threatening phone calls, and public lynch call-outs were commonplace in the state-run media. During the demonstrations in 1996 supporting Radio 101, when Tudjman’s reign was threatened for the first time, every day I received a note containing threats directed at me and my family, signed by the “Knights of Pakracka valley”. They were war criminals that killed many people during the war, and were never prosecuted. The Radio 101 attorney handed these notes to the police, and I alerted the Security agencies (headed by no less than the son of Franjo Tudjman), underlining that if anything were to happen to anyone from Radio 101, they would be held responsible.

I’m not sure whether it was the international pressure that made them protect us, but after that, this type of intimidation stopped. I remember the TV show Latinica being broadcast in 2005 with the subject of Tudjman’s heritage. For days after that episode my colleagues and I received threats by phone, mail, letters, including threats directed at my children. The secretary managed to write down the number the threats were coming from and we alerted the police, so the state attorney’s office had to react by duty. The man was found and indicted, but since the further trial process was up to me, I opted out of it. Of course, reactions from the international public and institutions, our journalistic circles and SEEMO made a great effect for the creation of enough pressure to make state officials do something about this.

SEEMO: Were your cases prosecuted by the legal system, and were they resolved? Were the perpetrators ever found and convicted?
Zrinka Vrabec Mojzeš: As I’ve mentioned, there was no trial, but the threats kept coming. Only in a few cases in Croatia (Helena Puljiz, for example, who was pressurized by secret services) has there been a conviction, and even then, it was ten years too late. Still, those that masterminded the physical attacks on some of my colleagues were never found or prosecuted.

SEEMO: How did you take this on a personal level? Has it impacted your life?
Zrinka Vrabec Mojzeš: It is a very inconvenient situation. I wouldn’t say I was afraid for myself, because I made the willing decision to fight against criminal privatizations, undemocratic regimes and media freedom violations. But I was afraid for my family and my children, who were exposed to many kinds of “silent” bullying in school for a long time. Of course, they are not to blame for their parents’ actions, who should have a certain sense of responsibility towards their own public acting. In some sense, you’re dragging your children into a space they do not belong in.

SEEMO: Do you have any advice for journalists who experience, threats, attacks, pressure and censorship? What should they do?
Zrinka Vrabec Mojzeš: Journalists should absolutely go to legal institutions which, at least formally, have to react. They also must address their journalistic association, as well as all international organizations that deal with the protection of journalists and media freedom. They should speak out to the public as well. The solidarity of the public is probably the best protection, because then you cannot be suddenly “eaten by the dark”.

SEEMO: How does one protect oneself from these forms of attack?
Brankica Stanković: The rule is that for every piece of information we publish, we have to have evidence. When you put things that way, sources are important in the sense of hearing about something, and then investigating and proving that by yourself. We always have official confirmation for our information, we don’t just rely on sources.

SEEMO: Have the reactions of SEEMO been significant to you in any way?
Zrinka Vrabec Mojzeš: Of course, any journalist that experiences threats finds SEEMO reactions to be significant, because they force state institutions to do their job, and it engages the public about truthful information. Journalists have done a great deal of work in investigating corruption on the highest levels, which has resulted in verdicts being handed to some very prominent government officials in Croatia, among them former Prime Minister Ivo Sanader. Because of this, the role of journalists, especially investigative journalists, is still a dangerous one, even though less and less in time. It makes a huge impact on the development of democracy and its institutions, even in countries that have formally fulfilled the basic standards of rule of law and human rights.