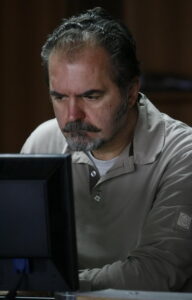 SEEMO:Please tell us, how has the attack you experienced affected your life? Tell us about what happened.
Davor Pašalić: I was at the American Embassy reception on 2 July 2014. I met up with my friends later, and in the evening I went home by foot across Branko’s Bridge (the bridge over river Sava) and bought some food in New Belgrade around 2am. I sat down on a bench, and three very young men approached me. They told me, ‘Now you’ll give us all your money’. I responded that I won’t, when one of them said he has a gun. I told him I don’t care about your gun, thinking that he doesn’t really have one. Then the other one asked me ‘Are you a Croat?’ No one has ever asked me this in my 55 years of life. I was born in Belgrade and have spent my entire life here, and consider myself to look like an average Serb. How did he recognize me as Croatian? It can’t be that only Croats in Belgrade refuse to be robbed. I told them ‘Even if I were, I won’t give you anything’. They called me ‘ustaša’ and began hitting me. Ten minutes later, they ran into me again some 300 meters away, and when I told them once more that I won’t give them any money, they responded, ‘We don’t want your money’, using the pejorative term for Croat again.

SEEMO:Have the culprits been caught? Have you received any information from state authorities about the investigation?
Davor Pašalić: The perpetrators haven’t been caught, and the police informed me that they are searching for them. Since a month ago, they have a special team working on this case.

SEEMO:Do you know who is behind your attack?
Davor Pašalić: I do not know who is behind my attack. Rather than ‘who?’ I am more curious to know ‘why?’ I don’t know if money was the reason, or because I wasn’t a Serb in their opinion. It’s been more than two years since I’ve worked for any foreign media, and FoNet is a news agency that doesn’t deal with affairs, only daily events. I don’t owe anybody money, nor does anybody owe me. Friends told me not to mention this, but I also don’t cheat, so that couldn’t have been the reason. Maybe they were irritated by my suit and tie, or because I had badges with flags of SFRJ (Former Yugoslavia) and the USA?

SEEMO:Is it possible to work normally, without fear of another attack? Does it affect the work of a journalist?
Davor Pašalić: The attack had no influence on my work whatsoever. I’ve began writing for the Zagreb daily ‘Nacional’ since it is being published again.

SEEMO:Has it affected your personal life, and the life of your family?
Davor Pašalić: When I leave the house after dark, my father sends me off as if I were going to war.

SEEMO:What’s your advice to colleagues who find themselves in a similar situation?
Don’t eat out late at night.