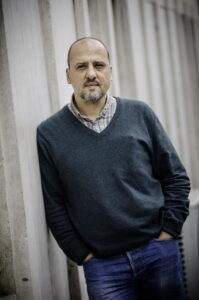 Ahmet Şık is a Turkish investigative journalist and the author of several books. He wrote The Imam’s Army on the life, work, and political movement of Fethullah Gülen. Şık was detained in March 2011, and the draft book was banned in Turkey as an ‘illegal organizational document’ of the secret organization. The text of the book was posted online in response to Şık’s arrest on 1 April 2011. A version of the book was released in November 2011 under the name 000Kitap, edited by 125 journalists, activists and academics, and published by Postacı Publishing House. In 2011 Şık was charged with support of an armed organization. On 12 March 2012 the Istanbul High Criminal Court ordered his release pending trial.

There is another side, which is the pressure that political authorities exerted on media. The culprit of this pressure is not only the government, but particularly the media owners. Media outlets that the government direct control on one side, those mainstream ones that are relatively ‘independent’ have a government representative in their newsroom for each. This brings about censorship and self-censorship. Debate programs aired live on television are a good example of this phenomenon at work, as these shows over-represent pro-government pundits while under-representing critical voices. This is the worst era in the history of the Turkish media and I believe that it will further worsen, as the government has already taken steps to have a tighter control of both the media and the judiciary though new laws. Those include a law about Turkey’s Supreme Board of Judges and Prosecutors (HSYK), as well as the Internet law, while using its fight against the Gülen community as a pretext. When you think about the issue in a holistic way, it is not possible to be optimistic about the future of the press freedom in Turkey.

SEEMO:You have been arrested and spent a time in jail. Did this experience change your life?
Ahmet Şık: Neither my arrest nor the recent wave of arrests of journalists changed my mind. I am where I was in the past. I still oppose it if anyone is prosecuted for his or her journalist activities. Even when journalism is abused by some circles, it should not be a reason to be jailed. People have the right to report, and also the right to object to what is reported. Unfortunately, one fact does not change in Turkish media, which has a history of almost 200 years. When the Ottoman daily Takvim-i Vekayi was established in the 19th century, its owners could get an official permission only conditionally, by vowing to not challenge the ‘great interests of the state’. Similarly, today’s media organizations in Turkey do not challenge the great interests of power groups. Those who dared to challenge them were killed in the 1990s. Now they stopped killing them, but instead, they either arrest them or convict them to unemployment and hunger.