by EWB Archives 19. 06. 2015.
Though the number of seminars about media freedom in the Balkans has steadily increased in recent years, the awareness in the concerned countries about the absolute lack of respect for journalists in the region has not. Why is that? Is the political will missing to improve the situation? Or is it the lack of solidarity among journalists, editors and media owners to isolate those in business and politics who are guilty of undue influence?
Recently, a roundtable discussion held during the Annual Meeting of the European Federation of Journalists in Budva (Montenegro) with representatives from the OSCE, SEEMO, the Konrad-Adenauer-Stiftung (KAS), and EFJ affiliates from the region reflected the dramatic situation journalism finds itself in and journalists are confronted with in the Balkans.
EFJ affiliates have called for more solidarity and a joint fight for rights and for safety, for a strengthening of professional and ethical standards, for improving the social and economic status of journalists and the fight against impunity (see EFJ Resolution on media freedom and labour rights in the Balkans).
Oliver Vujovic, the Secretary General of the Vienna based Southeast Europe Media Organization, (SEEMO), said he felt pessimistic about media freedom and the working rights of journalists in the region, including Montenegro. “Many journalists are working on the black market and some of them live of only 200 to 300 euro a month,” he noted.
Marijana Camović, the President of the Trade Union Media of Montenegro (TUMM) said in her opening speech that the level of media freedom in the country is such that anyone who could find another job immediately quits journalism.
Many journalists in Montenegro work around 12 to 15 hours a day, as shown in a recent survey of the OSCE. Failures over the years have been so drastic that those who still have jobs are often forced to cover several job positions at once and for lower wages, said Camović.
Journalists are exposed to pressures from both politics and employers and are starting the day with the fear of losing jobs. For example, in the last few months, more than 30 journalists, employees and (false) freelances working for media outlets owned by Ringier Axel Springer Serbia were dismissed without any notice, reasons or any objective criteria for layoffs. The EFJ affiliates in Serbia immediately reacted to the massive dismissals. The EFJ introduced a formal complaint about this case at the Council of Europe’s platform for protection and safety of journalists. The EFJ affiliates in Switzerland and Germany have published press releases in solidarity with their Serbian colleagues.
In general, foreign media owners in the region have not fulfilled the expectations of journalists in terms of working conditions and press freedom issues. This has been considered as a use of double standards. Instead of improvement of the media situation as well as labour and professional protection of journalists, foreign and domestic media investors are profit-oriented. With unofficial banning of unions in media companies by western corporations, journalists and media workers are usually left without legal advice and social protection. This is the sad profile of a majority of journalists in Serbia, Montenegro and Macedonia. 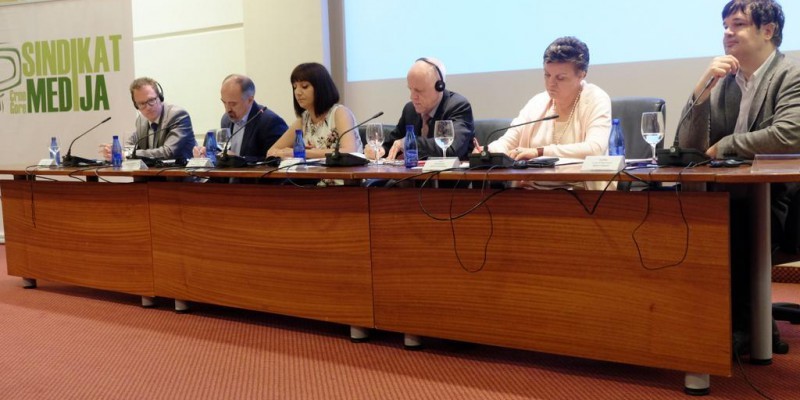 Another of the many challenges in the Balkans are how to bring more light into media ownership structures and separate between economic and political interest? In most countries in South-Eastern Europe there is a complete lack of transparency over who owns media in the country.

Some other negative trends observed by EFJ affiliates in the region, include:
Self-censorship: journalists are afraid of writing the facts or sharing their opinions because of possible retaliations. This is becoming increasingly a serious problem amongst journalists, while examples of drastic censorship on the internet, taking off news websites critical of the current government and arrests of citizens posting on social networks take place.
Tabloidisation: Journalism style is rapidly changing away from politics and foreign affairs towards entertainment and celebrities. This is a specific and very noticeable problem of Serbian but also Balkan media scene. This trend negatively affects the public rights to have access to verified information on topics of public interests, polarize the society and boost political influence on journalists and media professionals. Journalists are increasingly asked to make propaganda instead of reporting the facts.
Impunity: The deaths and attacks against journalists are still unsolved, crime and attacks against journalists are not properly investigated. Impunity is high on the agenda!
In this context, what can the international media and organisations do to support free journalism in the Balkans? A points action plan could be the following :

1. Helping national journalists’ unions and associations in South-Eastern Europe to be strong, independent and efficient in order to help journalists’ social and professional rights;
2. Supporting social dialogue in the media sector and help to uphold International Labour Organisation and European standards in all media (national and foreign owned);
3. Initiating and continuing at European and national level debates with politicians and interested media owners about quality and journalism as a public good;
4. Forming alliances among different media organisations, human rights and media watchdog groups, unions and universities on quality, training, media literacy and ethics;
5. Supporting training for journalists but also government officials and politicians about what independent media means and what conditions are required for journalists to do their job.
Author: Renate Schroeder (Director @EFJEurope)