Karin Kneissl, Minister for Foreign Affairs and Integration of Austria (2018) 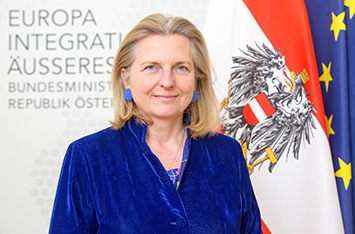 The number of journalists who fall victim to attacks, arbitrary detentions and even murder has increased substantially around the globe. However, the safety of journalists is an essential condition for the realization of the universal, inalienable right to freedom of expression and of the media, as stipulated in Article 19 of the Universal Declaration of Human Rights and Article 19(2) of the International Covenant on Civil and Political Rights. States have a clear responsibility to protect journalists to ensure safe working conditions.

Austria is thus supporting the protection and safety of journalists at international level and speaks out in international fora against increasing restrictions on freedom of the press.

On the basis of the first Austrian resolution on the safety of journalists in the Human Rights Council in 2012, Austria has frequently taken action to promote and develop this important issue in the work of UN human rights fora. In September 2016, a new comprehensive resolution on the safety of journalists was initiated by Austria and adopted in the HRC. It urges the immediate release of all arbitrarily arrested and imprisoned journalists and unreservedly condemns attacks on media companies. The text highlights in particular the specific risks journalists are subjected to in the digital age, as well as specific risks faced by women journalists in the exercise of their work. The resolution is the strongest text adopted by the HRC on this topic so far and is made all the more significant by the fact that it was co-sponsored by more than 90 states and adopted by consensus.

Moreover, the topic of safety of journalists played an important role during Austria’s Chairmanship-in-Office of the OSCE in 2017. In February 2017 Austria organized a high-level conference on Freedom of the Media in the Western Balkans with a special focus on the safety of journalists and media ethics. In October of that year, Austria organized an expert conference together with the Council of Europe and the Office of the OSCE-Media Representative on the topic of internet freedom with an emphasis on the role and responsibility of internet intermediaries.

One of the most important NGOs active in promoting freedom of the press in the Western Balkans and in Central Europe is the South East Europe Media Organisation (SEEMO). Since its inception, this organization has launched numerous initiatives that have succeeded in supporting journalists in the free exercise of their profession. This makes SEEMO a particularly important partner of the Federal Ministry for Europe, Integration and Foreign Affairs in the region.

I am very pleased that SEEMO is continuing its valuable efforts and remains committed to promoting a free media landscape and wish the organization every success for the future.

Minister for Foreign Affairs and Integration of Austria (2018)