Jorgos Papadakis has been a professional journalist for more than 25 years. He has worked for some of the biggest media outlets in his native Greece as well as regional and international media. He has also worked as a communications professional for human rights NGOs, international organizations like the UNDP, private corporations and political parties in the European Parliament. He is currently the Comms + Marketing director for a Brussels-based major European association, active in the field of social investment. He is the author of several publications and also co-authored the SEEMO Safety Net Manual. 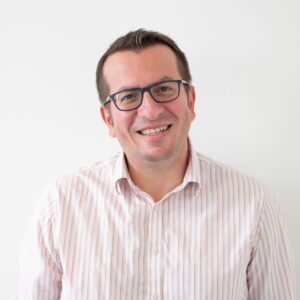 Tell us a little about yourself, your family, including how you got started as a journalist?
Well, I believe I was predestined to become a journalist. My grandfather’s brother was the first Greek journalist to be killed in the Albanian front during the Italian invasion in Greece (November 1940) while reporting for Athens daily Elefthero Vima. My uncle is the founder of a local newspaper in my native Crete, where I also published my first article at the age of 12. So, as you can see, my career path was already set before I was even born (smile).

Your professional work…
My professional work started at Antenna TV, Greece’s leading TV station back in 1993, while still a student. I worked for both Antenna TV and Radio until 1998 when I moved to Vienna as a Central Europe correspondent or Express daily, Athens. It was there when I first got in touch with IPI and the plans to establish SEEMO and I am really glad I was on board almost from the very beginning

You worked for years in Greece as journalist, but also you have a lot of experience outside Greece.What is the difference working in Greece and in some other countries?
Greece was and remains a very difficult country to work as a journalist. From the boom of private TV and radio in the early nineties, when journalists were perceived almost as gods, we reached now a point when they are abused, attacked or even murdered in cold blood. The extremes are a main characteristic of the media landscape in Greece and I would say this is maybe the main difference between Greek media and, let’s say the BBC, where I currently work part time as a freelance editor

What was your biggest challenge in your work?
Reporting about diversity and about what is not mainstream in general

How you see the media situation in Greece today?
I live outside Greece for many years now. Honestly, every time I return and switch on my TV set to watch the news, I switch it back off in less than 2-3 minutes. The quality has dramatically dropped, new media and social networks prevail and as almost everywhere, real journalism is nowadays very hard to find.

You are active in supporting the rights of minorities. What is the motivation for you?
I guess it is empathy. Ever since I was a child, I was always supporting the weaker ones, felt compassion and enormous understanding for their position. This translated to a drive, both professionally and personally, to investigate about the minorities in Greece first and in Europe at a later stage. You know that my country still refuses the existence of ethnic minorities in its territory, something that for the Balkans and the 21st century is a paradox, not to say a joke. Journalism-wise, this can be a source for great stories too, albeit they are rarely or not published at all (smiles)

Since years you are supporting North Macedonia and the people living in North Macedonia, as also the Macedonian minority in Greece. It is not typical for a person from Greece. What inspires you for this love for North Macedonia?
Macedonia is a very unlucky country, stuck between three greedy and politically retarded neighbors that always had claimed over it. And whereas Serbia, also due to the Yugoslav federation, gave some ground to Macedonia, Greece and Bulgaria did not. Greece even forced a name change to allow NATO membership whereas Bulgaria stubbornly insists that the Macedonian language is a dialect of Bulgarian. How can you not sympathies with these people? On the Macedonian minority in Greece, it was a revelation from me since they are not recognized and isolated. I felt i had the duty to assist in bringing their sad stories to the spotlight. We have moved a bit forward since my initial involvement in the mid-nineties but we still have a lot of things to do to change the majority perception about Macedonians, Turks and others.

How hard it was to stay always professional as journalists?
It is tough, no doubt about it. Sometimes emotions are too strong and you have to control them so that the reader/audience gets an unbiased report and not a summary of your wishful thinking.

In the past years your work was not more directly in the media. First you were active in a political group in Brussels. Can you tell us a little more about this period of your life, please.
Yes, I was Head of Communications for the European Free Alliance (EFA), a political party sitting together with the Greens in the European Parliament. For me as a journalist and communicator, this was an exciting opportunity to be more active inside the EP and throughout Europe supporting a very progressive, people-oriented agenda. In addition, EFA is the European political home of the Macedonian minorities in Greece and Bulgaria and many others in similar situation all around Europe. So it was an easy choice at the end.

Does it mean that you were also by emotions and membership connected to this political group?
Absolutely! I could have never done the same for a political party that openly opposes self determination and minority rights in many EU member states.

Today you have a totally different job. What made you to choose your new profession.
Well, I am Communications director at EVPA, a pan-European association of social investors, so it is not a totally different job. It is sometimes refreshing to try new things, it gives you a new perspective. And of course, societal change, just transition, sustainable development are concepts very deep in my heart and pursued full speed by the members of this association. I also know that this engagement has an expiry date, though. Once a journalist, always a journalist (smiles)

How important is the work of SEEMO as a press freedom organisation?
Very important. Being around SEEMO in various functions since 2000-2001. I watched it grow and become the leading Central and Eastern Europe media watchdog. We have faced many challenges of all kinds, and yet here we are still. I am very proud of SEEMO, I consider it partly my own. (smiles)

Please walk us through a typical workday. How do you manage your time today?
The pandemic has changed everything. A typical day is much longer now, lots of conference calls, occasionally also reports for BBC, another book in the making…not easy to cope sometimes. But hopefully the new normal will be different from what we all experience now

Finally, as press freedom, human rights and democracy are very important in your life, can you give please some advice for younger journalists?
I am terrible in giving advice, especially to younger colleagues who are so much more advanced than we were in their years! The only thing I would suggest is never to compromise, never self-censor themselves. It might cost a job but they will sleep peacefully at night. And principles, especially in journalism, since they are so hard to find nowadays, will always be appreciated and rewarded at the end.