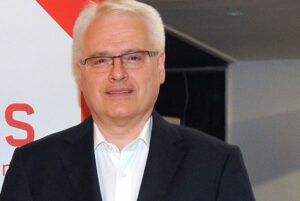 I would like to hereby endorse the work of the international non-governmental organisation SEEMO, which has been assembling editors, media publishers, and leading journalists from Southern and Eastern Europe for a number of years.

Since one of the priorities of my presidential term has been reconciliation of countries of the region, establishment of cooperation in different fields, and development of friendly relations among our nations, we aspire to the same goals. Both as President of the Republic and a former activist who was involved in the work of a number of non-governmental organisations, I am aware of the importance and influence of the media on democratic processes and changes of social awareness in the post-war period. For this reason, I have the highest regard for the efforts that you have been making with respect to protection of freedom of the media and offering help to journalists in protection of their human and professional integrity.

I had the honour to meet with members of the SEEMO Board who visited me within the framework of the project “press freedom missions”. On the occasion, we discussed the political and economic crisis that has jeopardised journalism as a profession and, as a result of commercialisation of media content, precipitated a drop in the quality of journalistic contributions and the loss of credibility of the media as a whole. This is not a problem just of Croatia and the countries in the region, but rather a global issue that should be a cause for concern of all holders of key political offices and the executive, including me personally.

For – there is no free country without free media and free journalists.

Although over the last decade SEEMO has achieved much by organising conferences, seminars, and workshops for media professional from the region, there are many challenges and plenty of work ahead of you. I hope that you will persevere in your work and pursue your mission initiated by Dr. Erhard Busek, a seasoned promoter of European values and a great friend of the countries of the region.

Therefore my message to all your members and colleagues is the following: Pursue your struggle for freedom of your work, be critical of any government but do not forget that freedom also means great accountability. Accountability to the general public whose trust you must win again. Just like us, politicians.

President of the Republic of Croatia
Zagreb, 23 October 2014