Tell us a little about yourself, your family, including how you got started as a journalist?

First of all I would like to thank you for the opportunity to talk about journalism in Greece. Not so much for my case as I do not like to talk about myself, but obviously from my personal point of view, conclusions are drawn about who I am and how I walk in life and profession.I was born half a century ago plus 5 years, and all I remember was looking for all the answers, to all the questions.

What I was always looking for was the truth behind the events, big or small, that determined my family’s life, the resistance against the German occupation and the award of poverty and marginalization as a reward from the State. In the division of people into mortals and others. To the poor and the rich. Nobles and plebeians.

So, the only profession that could give content to these searches, I think, was journalism. This was the only one I chose and as a reward I received the award from acquaintances and friends that I made the profession of journalist my life. So I started as a teenager, as a newspaper editor, and later, as a reporter before moving to the Hellenic Broadcasting Corporation ERT. 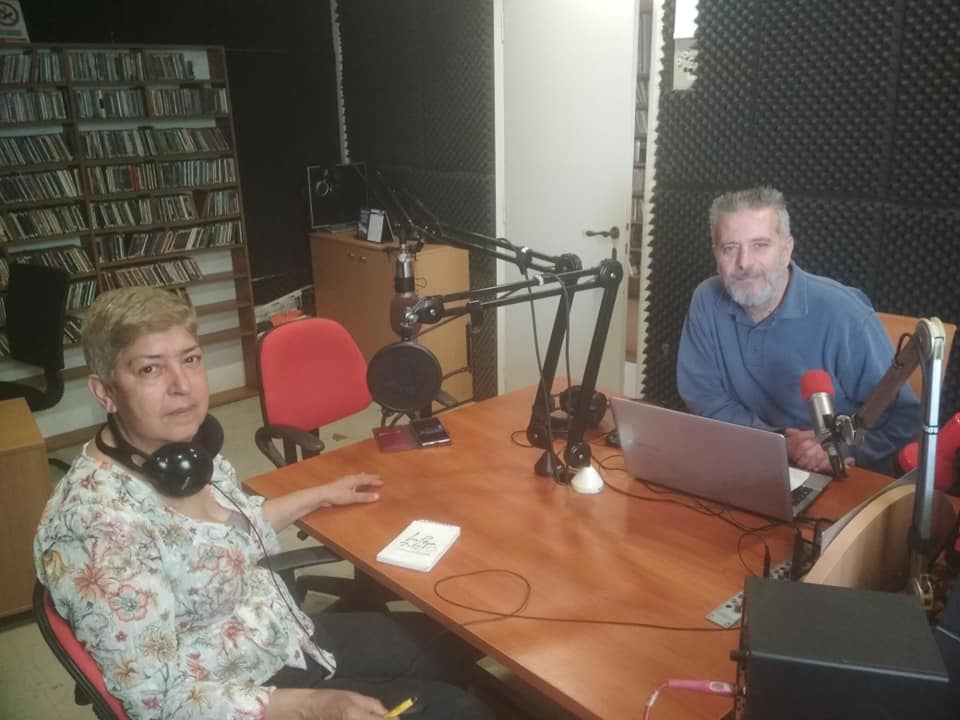 So my professional career of about 29 years, concerned free reporting and research, interviews, radio programs, television documentaries, responses to the main program of ERT where I became editor-in-chief, and radio producer.

ERT, the public broadcaster in Greece is part of your life. Can you tell us a little more about your work in ERT.

ERT is my whole life, literally. I was young when I got a job right after the military administration left its second channel, which became ERT2 from the Armed Forces Service, and I left on the first day of its reopening and after two years of blackness with its closure by the Samaras Government. Therefore, I belong to that group, which created and set up free, pluralistic information and politically correct speech after the military on 1983. Consider that every commander of a military unit was the director of what we now call ERT2 and half of the regional radio stations, including the radio station in my city, where I worked with various forms of work, which I described above.

What is the difference between journalism when you started and today?

The transition was not easy. There were people, workers who had learned to obey military orders, and under them to produce a program. But, with the guidance of inspired people, the team that took over after demilitarization and included me, we started from the beginning, what we call and real information. It was easier to work impartially, objectively, respectfully following the rules of ethics in the periphery, than it was in the center. The center was and always is closer to the government, and in Greece, the government aw any other Power, has always seen the press as a means of propaganda and not objective and pluralistic information of the citizen. 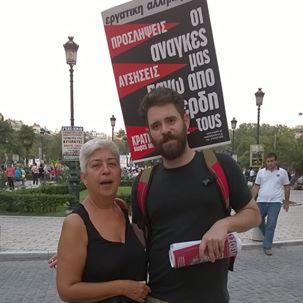 What was your biggest challenge in your work?

The changes in the field of information and journalism, changed from the invasion of a new type of entrepreneurs in the field of Press. Entrepreneurs who saw the power of the press as a means and tool of power but also the imposition of political and economic power. And obviously they also chose employees willing to serve them. So the journalists instead of servants of information, they became image makers and considered themselves as the fourth power in the country, and a large part of them quickly slipped into what tends to dominate if it has not already dominated, whoever pays controls citizen information.

Only this is not information, it is propaganda, sometimes highly paid and sometimes very cheap.Apparently, the ten-year economic crisis of the country, the changes and the new media, which brought cheap, unpaid and uninsured potential, also helped in this. And as I mentioned before, whoever pays, also checks the information. It is therefore not surprising that Greece has no confidence in its information.

The data of the latest report of the Reuters Institute Digital News show that in our country only 28% of the respondents trust the news! The preference for information has shifted from traditional media to social media, such as Facebook, which is exacerbating media penetration.

What is the biggest challenge in my job? To remain the one I started. Not out of romance, but out of position and values. Even if the road is lonely. Even if I look foreign to the situation situation that has been formed and consolidated in the sector..

How you see the media situation in Greece today?

The constant confirmation of the low credibility of the Greek media in recent years constantly makes the landscape black and gloomy. Note that the current government pays the media to reproduce its propaganda as information, while the previous government, apart from the party newspaper and party radio, had a war against all other media. It is all a matter of money.Whoever pays has the appropriate treatment and promotion. It is no coincidence that during the pandemic, even yesterday in Parliament, the debate in the public sphere is how many millions the Government has given to the media to “play” how effective and excellent its policy is.

Attacks on journalists and media companies are a problem in Greece. How to change it and stop the attacks?

Whoever is not “yours” is an opponent. Anyone who does not propagate “my political truth”, anyone who dares to investigate scandals and corruption, is eradicated, and under attack and threat. So the question is who dares ?? Few. How will this change ?? How could we go back to point 0? I thought the crisis would be an opportunity, and a bet to restart. For a return to principles and values. Unfortunately, poverty and unemployment, especially their fear, do not help on the contrary, they exacerbate the problem. 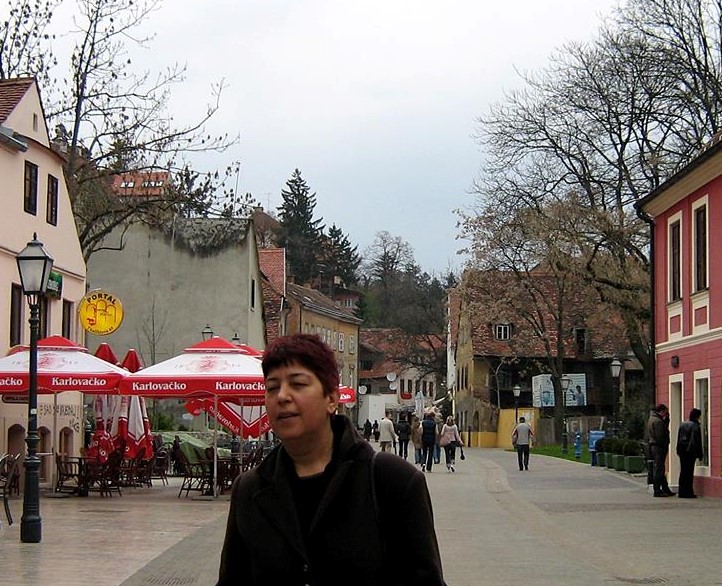 And the human rights situation in your country?

In Greece, with the economic crisis that has recovered with the coronavirus pandemic, the acute refugee issue for the past five years, I am afraid that human rights are constantly falling apart and is under persecution.

It is also worrying that extreme racist and neo-Nazi voices are gaining strength in the country.

How hard it was to stay always professional as journalists?

You were very active in the trade union, in the Panhellenic Federation of Journalists’ Union, but also in international in IFJ and EFJ. Can you tell us a little more about this work.

Trade unionism is an important chapter in my life. It was my honor to represent my organization in the Federation and the Federation internationally. It all started when the Federation on 1998 for my contribution to the objective and valid information of the public opinion and for a dynamic journalistic presence that paved the way for the equal participation of women in the evolution of the Greek press.

For trade union consistency, competitive spirit and solidarity, I have been honored on 2018 by the Union of Authors, of which I am a member. Between us, however, I am afraid looking at the state of information in Greece that I have failed. For 20 years, with few exceptions at the level of Associations, we have neither Collective Bargaining Agreements, nor a minimum guaranteed income, nor adequate public insurance. Greece remains a closed club, which hides the big picture. I ended up with all this, remaining a simple member of my Union, when the Federation, following the demands of the extreme voices that now govern it, succeeded in not holding the annual meeting of the EFJ because, the country then called FYROM would attend the conference as Macedonia with two representatives. That’s it. Politics and not journalism. Party diplomacy and not the search for solutions to the aggravated problems of the industry. The conference was held in Bucharest. I left the Federation as it made no sense to go to war with people for whom trade unionism was another level of power. After all in my country, where the Writers’ Unions ask the Government to create jobs, ie press offices in Municipalities, regions, Ministries, in order to hire journalists, to do propaganda work, what point of view do you want me to have? 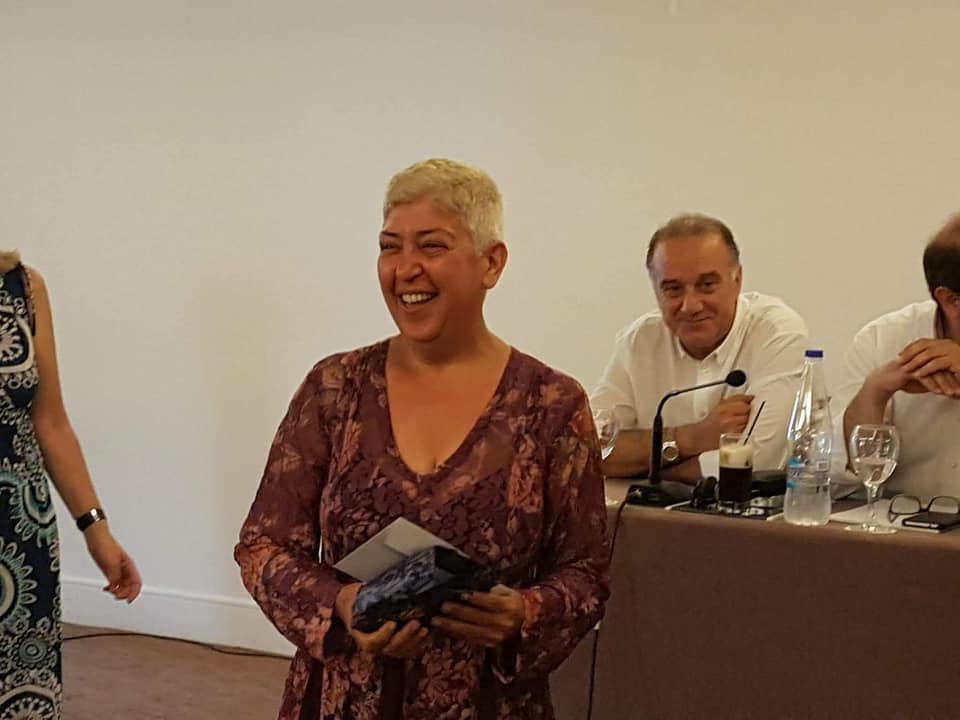 Has Covid19 influence on the media in Greece?

Is it possible not to affect them ?? Evil is magnifying. Elastic forms of work, distance work, unemployment and Government resources to those who remain to produce propaganda “the Greek Government does everything perfectly, better than all countries” and to hide that the pandemic became an opportunity for enrichment and squandering of public money for some while impoverishing the majority of the Greek people.

How important is the work of SEEMO as a press freedom organisation? SEEMO organised some years ago a mission to Greece, can a mission help to improve journalism and solve some problems?

The mission that took place in Greece was very important. It helped to change a law that we called a tyrant for many years. And this is not small at all. Fearing persecution, journalists were considered undercover for many years. It does not matter if this perception is entrenched in some. The law, however, has changed.I wish there were other missions.

My colleagues in the North Aegean would need your support, as they are confronted daily with the darkest instincts of the far right in their region, reporting on immigrants. 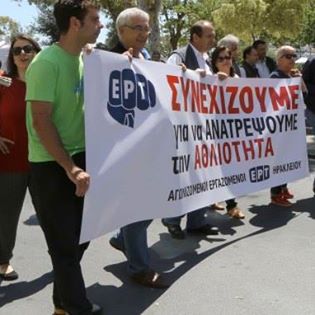 Do we have solidarity between journalists in Greece?

In general, yes, we have solidarity if it is often exhausted in issuing a statement in order to denounce an attack, whatever its form, against them. Sometimes, the one who seeks solidarity also writes the statement of support.

You live in Heraklion. What is the difference between journalism in a smaller town and to be a journalist in a capital like Athens.

There are no big differences now between the center and the periphery of the country. Perhaps in smaller societies, control is greater than in society itself. The problems are the same, as the crisis is widespread in the country.

As I said before, due to my health problem I have limited my professional activity. However, I always work on archives, mainly history, as a consultant on a TV show for autobiographies on public television all the time, so I read, read, research, keep up to date. Mostly my work is done from home with a very flexible schedule. But no discounts on the basics.

Finally, as press freedom, human rights and democracy are very important in your life, can you give please some advice for younger journalists?

Tip …. As difficult as it is, the profession of journalist is an exciting adventure, anti-authoritarian, therefore it is a continuous path to freedom. And freedom is the supreme good of man. Therefore it is an honor for each of us to serve it every day.