Tell us a little about yourself, your family, including how you got started as a journalist?

I was born in 1965 and am the father of two grown sons who are finishing their studies. The older son is doing a PhD in international political sciences in Berlin and the younger son is completing ethnology and cultural anthropology studies at the Faculty of Arts in Ljubljana. Both are excellent students, but I am nevertheless worried about them since they are members of the first generation that will not necessarily live better than their parents. I keep wondering how this has happened, to what extent this is our own fault and how broader social circumstances have contributed to that – external factors that we cannot typically influence. I guess this reflection is part of being in this profession, always trying to dig down to the essence, seeking to identify the reasons and the consequences – traits that I find sorely lacking among the younger generation of journalists. When I was deciding whether to pursue a career in journalism in the 1980s, there were too many role models in journalism to even consider remaining stuck in the average.

What is the difference between journalism when you started and today?

Pretty much everything was different back then. Externally, undoubtedly the biggest change is the miraculous development of technology, the revolutionary changes that have upended the workflow of the journalist to such an extent that I almost need not mention anything else. Unfortunately, technological change has not only been leveraged to improve the quality, speed and reach of information. It has also made journalist more perfunctory, less relevant and less respected. To a large extent the profession has itself to blame for that, but many others have eagerly taken part in the trampling and devaluation of the fourth estate – politicians, centres of economic power and many others.

Please present us your professional life.

I started dabbing in journalist in secondary school and then as a student at the Ljubljana Faculty of Social Sciences and Journalism. My first work appeared in local media, but from the mid-1980s I started a collaboration stretching over two decades with the national public radio (at the time called Radio Ljubljana). I started at the central desk, where we prepared hourly radio news, which was an excellent school of news journalism of the kind we did not get at university. Radio is “news, music and weather report,” was one of the adages of our mentor at the time, and despite the profound technological changes and other novelties, it still stands. Unfortunately, the mentorship system was eventually abandoned.
From 1988 until January 1991 I was the radio correspondent from Belgrade, which was a unique professional experience that set the stage for my entire career in journalism. This was a time when Yugoslavia was disintegrating against the backdrop of outbursts of Serbian nationalism and populism, which led to Slovenia declaring independence, triggering a ten-day war that was subsequently “upgraded” into years of armed conflict across the former Yugoslavia and thousands of victims. I followed the building of Slovenian statehood from the vantage point of doomed Yugoslav federalism and in the midst of maelstroms of war, with tanks on Slovenian roads and border crossing – which meant they were not confined to Yugoslav army barracks. In 1995 I became the editor-in-chief of the news programme at Radio Slovenija, from 2006 to 2009 I held a variety of editorial posts at Dnevnik newspaper, and for the last eleven years I’ve been the general manager of the Slovenian Press Agency.

Working as STA general manager you had to fight with many problems. Can you please present us a little your work for STA? What was STA in 2009 and what is STA in the year 2020?

During the term in office of the government led by Prime Minister Janez Janša after his first election victory in 2004, the STA was co-opted. The government administration tried to transform a national press agency that was created right after Slovenia gained independence into a government mouthpiece, even though it had a young, professional team and was well positioned as far as national press agencies are concerned to play the role of a public media outlet. That era – the term of the Janša government between 2004 and 2008 – was marred by interventions in the ownership structures of public as well as private media in general. Ownership changes, quickly followed by staffing, happened at the Delo and Večer newspapers, the Siol news portal, which is owned by the majority state-owned Telekom Slovenije, and at public broadcaster RTV Slovenija. This was a time when I left national radio: first a new law governing RTV Slovenija that presaged significant staffing changes was adopted, and the articles of association were changed quickly thereafter, cementing the status.
I arrived at the STA in 2009 as the agency’s first ever director picked in a public call for applications. Before that, directors were appointed by government decree. Two years later, in 2011, the special-purpose act on the STA was adopted, providing a legal basis for the agency for the first time in its then 20-year history. The legislation safeguards the professional independence of the STA, the supervisory board is appointed by an absolute majority by the National Assembly, and a special provision of the law governs the financing of our activities with budgetary funds in a manner that is not in violation of EU regulations. We are also allowed by law to perform commercial activities, which contribute over half of our overall revenue.
Due to the crisis at the end of the previous decade and the numerous Slovenian media that ran into trouble, the STA branched out into looking for opportunities on the non-media market, which required internal restructuring and a reform of the work processes. This was a path that led to the creation of new products designed for a broader market. We are fortunate that our in-house R&D team has a wealth of knowledge and ideas, and combining that with tender opportunities at home and abroad, we have been able to secure additional funds to finance our development projects. But all the while we have made sure that our core product – production and distribution of current, unbiased and high-quality text, audio, photo and video content to our subscribers – has not been eroded.

There are certain specifics to working in each media outlet. After spending 25 years in the most fluid medium, which radio undoubtedly is, it was a shock for me how strongly working in a newspaper affects a journalist, leaving a mark that can never be brushed off or concealed. Agency work perhaps involves even more precision, speed and knowledge, and this is precisely what we have been focusing on since my arrival at the agency. The STA has an excellent editorial team and superb journalists, who are experts and specialists in their respective fields, which has made it easier to quickly steer the STA among the most important purveyors of credible news and content.

Did politicians try to influence your work? If yes, how you reacted?

Of course there have been such attempts in my reporting career. I always rejected them and successfully deflected them. I believe that this is the key task of each good editorial team. And if the team is good, the reporting staff feel that, which significantly narrows the scope of triggers that may serve as reasons for exerting pressure. Politicians always try to exert pressure, but high-quality reporting work managed by good editors serves as a deflector. This has always been a challenge for me, both as editor-in-chief at Radio Slovenija, when I was in charge of content, and now as the general manager of the national press agency.

You met also many important persons. Maybe if you can present some of them.

There have been a lot of them. The entire gamut of Slovenia’s political leadership where the greatest mark has been left by the country’s first President Milan Kučan and the late Janez Drnovšek, a prime minister who later became Kučan’s successor. Of course, there is also current Prime Minister Janez Janša, one of the key figures of Slovenia’s independence efforts. I’ve also met in person all the leaders of former Yugoslavia’s entities, including Slobodan Milošević and Ante Marković, the last prime minister of Yugoslavia as a one-party Socialist state, as well as commanders of the Yugoslav People’s Army, who “signed off” the bloody continuation of the breakup of Yugoslavia. There have been a myriad of opportunities to meet foreign leaders. There was the Bush-Putin summit hosted by Slovenia, a visit by former US President Bill Clinton, the pope came to visit twice etc. 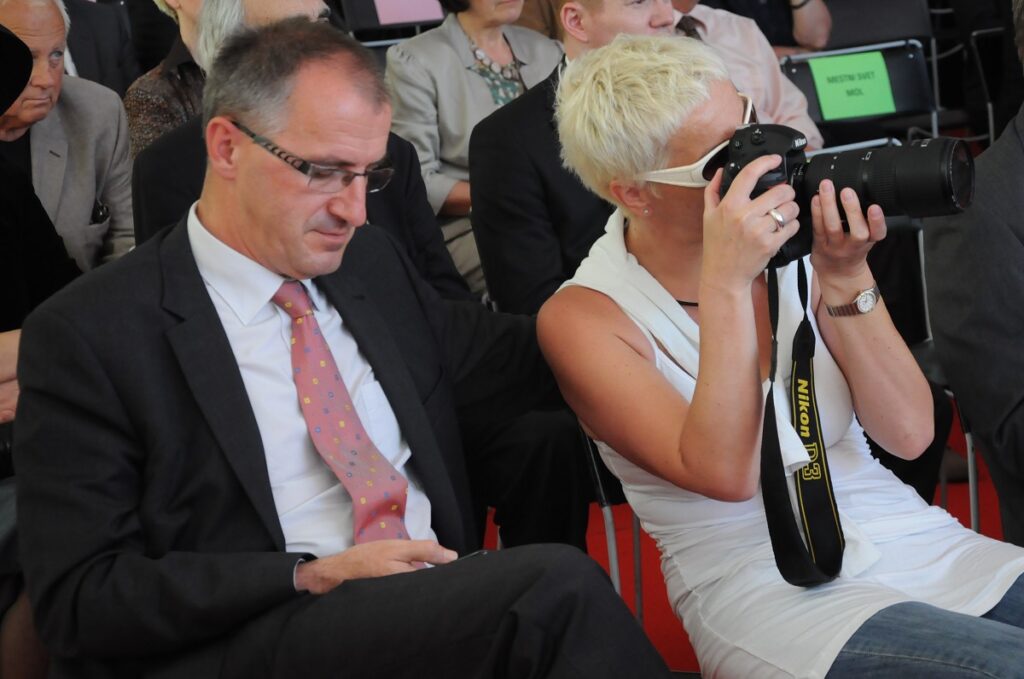 Your work is connected to the South East Europe Media Organisation (SEEMO). How important is SEEMO for you?

SEEMO has always been an opportunity for me to maintain and strengthen ties with the media and colleagues from that part of Europe. All I can say is: priceless!

On the one hand, it is much easier than it used to be. On the other hand, the sheer scope of information channels created by new technologies tends to make one anxious – the fear of overlooking something that you shouldn’t. That is exactly what demands of every leader in the media world to exercise strong self-discipline, time management and, naturally, a the maximum degree of selectivity you can afford, to ensure that the big picture remains as unbiased as possible while browsing through various genuine news sources and merely ersatz news content on social media.

How you see the future of media, especially news agencies?

Despite all the technological advancements, the true role and significance of news agencies are evident on a daily basis. The more social media pave the way for the decline of their own credibility, the more the raw, correct and precise information will be crucial. News agencies take care of exactly that – they have proved to be a real antidote to disinformation, including in the corona time.

How you see the media situation in you your country today?

Unfortunately, it is not good. Change is needed, including legislative reform, but not the kind authored by the current government. Their proposed changes aim to subjugate public service media as well as make life even harder for private media, particularly newspaper companies, which are already in a bad place. I hope the legislation is either passed thoroughly changed or withdrawn altogether by the ruling four-party coalition.

Finally, as press freedom and democracy is very important in your life, can you give please some advice for younger journalists?

The best thing for a young journalist is to commit to the values which are imbued in the vision of the media company I manage. Start with creating unbiased, comprehensive and timely content, and follow the development trends to reach out to new generations. According to the latest European studies, due to numerous untrustworthy online providers and fake news, these generations place great value on verified information by professional media companies. In the more developed parts of Europe, trust in such media companies has been increasing, whereas confidence in content produced by online providers and social media has been decreasing. This means there is hope.