Waiting for the new Thomas Jefferson

Tell us a little about yourself, including how you got started as a journalist?

I was born in Belgrade under German occupation in 1944 and after the liberation lived in the same city as the resident of four ‘different’ countries. That paradox tells a lot not only about my home town and the country, but I think about whole region too. It seems that the people and the nations living in South-East Balkans do share many roots, traditions and cultural values, but were too often inclined to stress genuine but much smaller differences between them, developing at the same time a sort of ‘victimization’ myth, blaming all their neighbors for all their troubles in the past and today.
Though the life in my early years in one-party system was not very rosy, I had the luck to grow up in the city which in then bipolar world was essentially cosmopolitan more than many other in its Western parts. That contributed to the fact that being a ‘Belgrader’, despite my national (Serbian) roots, I really felt much more as the citizen of the world. Since I was a bit idealistic, though aware of the global realities, it seemed to me tempting to try to know more about the others and international relations and to use the chance of working in the foreign desk of “Borba”, the only federal daily in then socialist Yugoslavia.

You have a long year experience, starting from reporting in the time of “old Yugoslavia”. What was the difference of the journalism in that time and today?

My journalistic journey began in 1969. Tito was alive and well, and socialist Yugoslavia did function rather fine between two blocks. Of course, working in the foreign news section was easier than covering internal political, social and economic matters. Practically, there was only one ‘taboo’ in that field. Of course, it was non-alignment movement and Tito’s role in it. Though we applied a sort of self-censorship when we had to cover that subject, we dared to be more or less critical when we evaluated the events in some member countries and wrote about them. 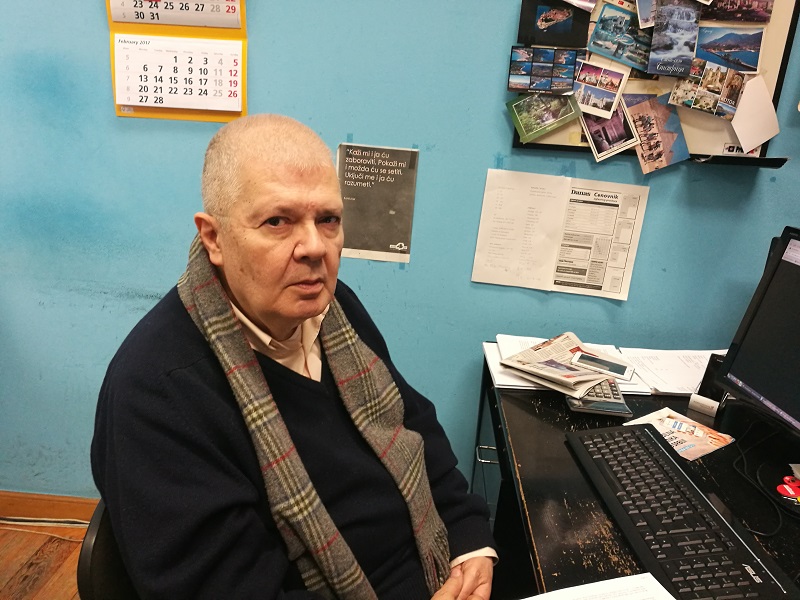 Radomir Licina in his office

It may, probably, sound like overstatement, but I’m confident that journalism in that time was more professional. Let me say that a year before I started to work as journalist, in 1968, professor John C. Merrill at the University of Missouri’s School of Journalism made a list of “the most qualitative or prestigious” elite newspapers in the world. “Borba” was among them, holding a solid 8th place.

What was your biggest challenge as journalist.

No doubt, it was a decision to join a group of colleagues who decided to challenge Milosevic regime in the second half of Nineties and start the politically independent daily “Danas”, leaving more or less safe havens under the state umbrella and jump into cold and troubled waters of private enterprise. But, it was the part of a much longer process, which started in late Eighties, in old “Borba” (the first politically independent daily in former Yugoslavia) and then “Nasa Borba”. It seemed like desperate, almost suicidal, idea at that time and we really went through ‘thick and thin’ in the first several years, though we had an international (financial) support that was valuable but not big enough for a national political daily.
I used to call these early years ‘a heroic age’ of “Danas”, though we maintained our path, and our mission, even after Milosevic was gone. And I do not regret a single day of that journey, though we had to surmount many obstacles and challenges. This June, we celebrated our 23rd birthday. Hopefully, it will not be the last one.

You travelled a lot, you visit different countries. Can you tell us a little more about this period in your career.

That period was completely different age. “Borba” was not a rich newspaper, but even we had several permanent correspondents in different capitals, not to mention special reporters. The people in general, worldwide, were much more interested in what was going in different parts of the globe. I got the chance to see many countries and to meet much more people in Europe, Asia (including Middle East), Africa and North America.
Unfortunately, globally, too many people lost any interest about what’s happening in other parts of the world – except when it was connected to the interests of their own country. Even some big and rich newspapers in developed and well-off states do not have correspondents or bureaus in faraway places anymore, nor even in their own countries! 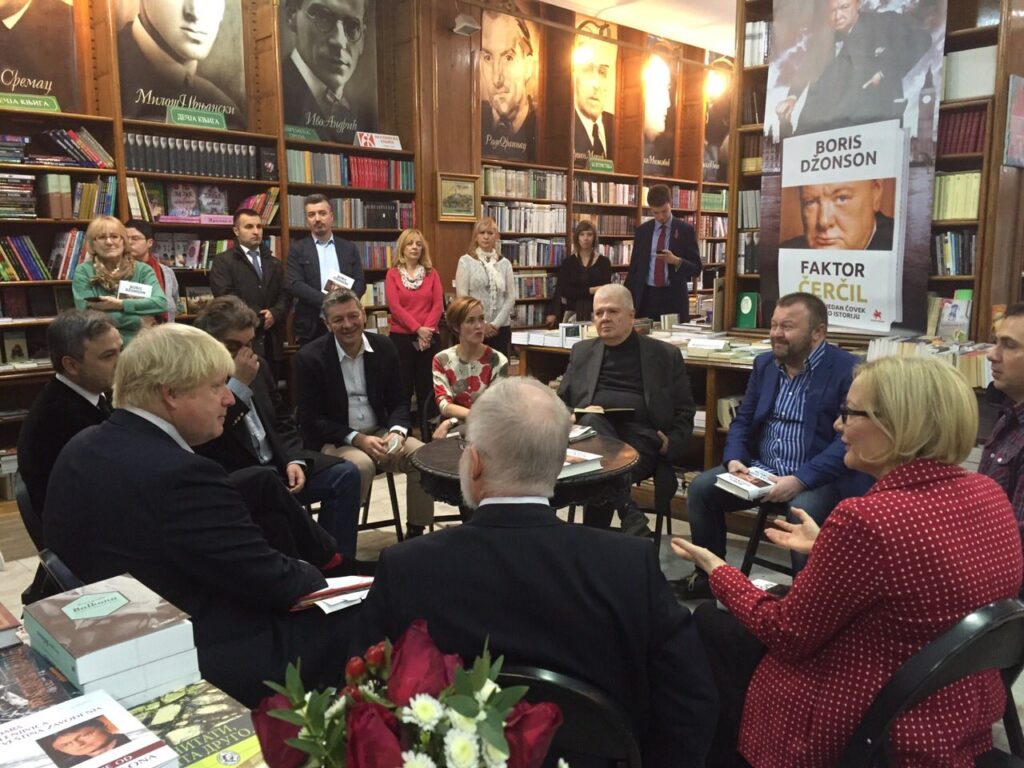 And you met also many important persons. Maybe if you can present some of them.

Yes, I met some globally ‘important’ people, talked to them, made many interviews with presidents, prime and foreign ministers, but I was much, much more impressed by ‘non-important’, ordinary men and women, who happened to speak English, and lived in India, USA, Iran, Finland, Greece or other countries. Like me, many preferred to be ‘citizens of the world’.

You worked in the daily Borba, after that Nasa Borba and today you work in Danas. Can you present short each newspaper where you worked.

Essentially, I do not make any difference among these three newspapers, since all of them were serious and qualitative dailies, which paid and pay a lot if not everything to the issues of res publica, public interest. All three were national, but not nationalistic dailies. And all of them had strong anti-war and open-minded editorial policies, which are essential for any civilized and democratic contemporary society. I have to add that in Ljubljana 2002 “Danas” received prestigious award Pioneer of Free Media by IPI and Freedom Forum.

You are co-owner of Danas. How hard is to own a newspaper in Serbia today.

Yes, I’m one of the now six co-owners of “Danas”. This job sometimes seem to be a sort of ‘mission impossible’, since we do not have real market and real democracy and are confronted with almost unimaginable number of problems in everyday’s work, since we do not belong to any political or interest group as our financial, political or social back-up, except our readers, of course. But, alas, due to everything this society went through during the last thirty years, there are not too many of them. The tide of tabloid journalism was and is too high and the people sometimes do not have enough time or will to read in-depth articles and analyses, which would help them to understand better our past, present or future needs and realities.

Your work is connected to the South East Europe Media Organisation (SEEMO) from the start of our organisation. You are one of the SEEMO founders. How important is SEEMO for you? 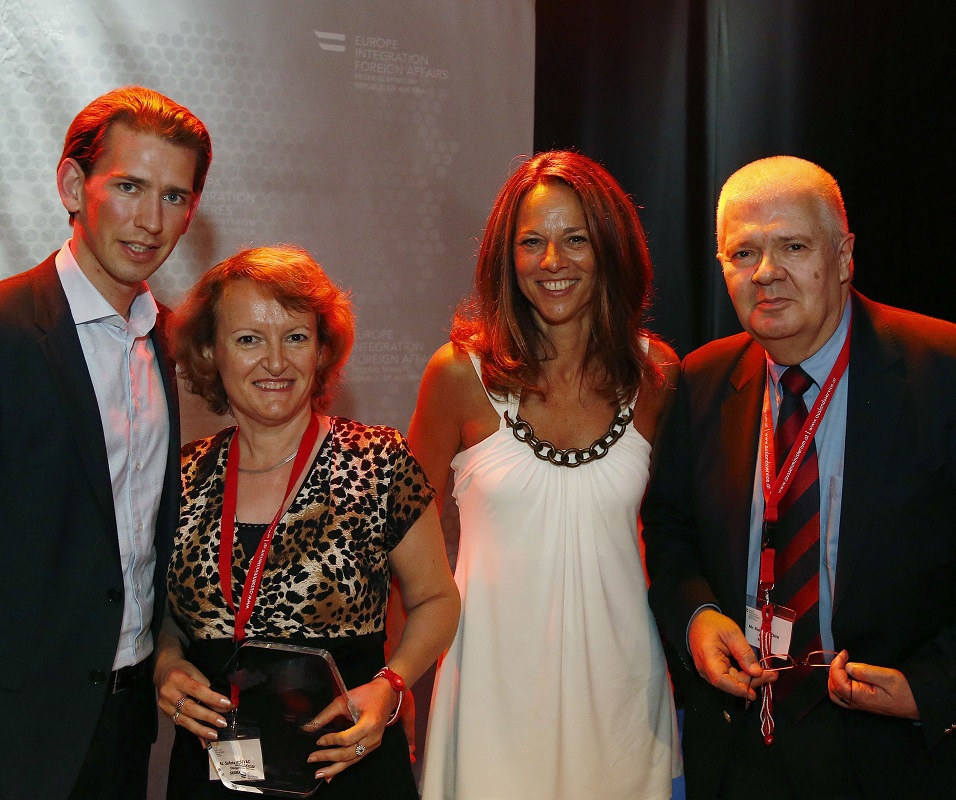 From the beginning of our organization, in Zagreb 2000, I thought it was vital for our basic duty to inform the citizens of our societies in unbiased and professional manner and to work on better understanding in the region. Twenty years later, and after organizing countless activities in the meantime, I’m certain that we did a great job. Looking at the current realities in the region, it may not seem so at the first glance, but each and every meeting, conference or forum we organized in that period showed loud and clear that most of the journalists from all countries do share same problems and challenges, but also same principles and values which are crucial for their indispensible job.

How you see the political situation today in Serbia and the role of politicians?

Unfortunately, we again have a sort of autocratic regime which occasionally tends to behave like dictatorship. Regrettably, the behavior of international factors toward Serbia is not always resolute and clear, or even impartial, enough. It is very handy for the ruling cast, and even opposition parties, to manipulate the public and to promote their private schemes and corrupt businesses without real political or legal consequences. Connected with deeply spread criminal structures, politics today is the most lucrative and profitable business in Serbia. The only losers are, of course, the majority of ordinary people.

Situation and role of media?

It is even worse than in the era of Milosevic, politically and economically. Except few independent voices, Vucic’s regime controls the bulk of existing media, including all major TVs with national frequencies, and all tabloids with sizable circulation which actually are open mouthpieces of Vucic’s propaganda machine. Like in Milosevic time, these small number of free media again are the targets of numerous attacks, as ‘foreign mercenaries’ and ‘domestic traitors’.

And in Europe… Worldwide?

Generally, media scene gives rather gloomy sight even in the most developed and democratic countries. The neoliberal globalization took its toll, and almost everywhere the profit and greed prevail over all other values. It happened even to some media which once were the beacons of liberty and independent opinion. 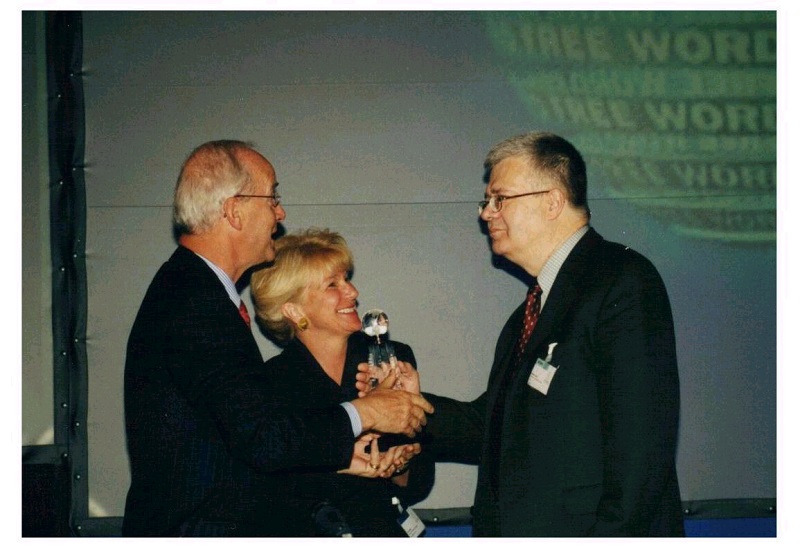 I know it will sound strange, almost irrational for many, but I still wait for the statesman, not the politician, who will say something like the one of the US Founding Fathers Thomas Jefferson, who wrote in 1787 (!): “Were it left to me to decide whether we should have a government without the newspapers, or newspapers without government, I should not hesitate a moment to prefer the latter.”
Of course, being a realist, I am aware that I shall not live long enough to hear or read similar statement, but nevertheless I do believe in these words.

It’s difficult to describe my ‘typical’ workday. It is not only because of my age, but also Covid-19 factor. I go to the newsroom every now and then, like many other colleagues, and keep the contacts mainly via phone, or through Internet. New technologies brought some good things too, so I follow some of the world mainstream media through their applications on the Web. Though I get a PDF edition of “Danas” every day at midnight, I still go out for a short walk tomorrow to buy the print edition of the newspaper. Also, I pay less and less attention to television, since I sincerely despise so called ‘infotainment’.

How you see the future of media. Especially print media.

In today’s world, and after more than fifty years of journalistic experience, I really do not dare to predict anything. It seems certain that printed press will survive in some form, like the book survived after the surge of the newspapers. But, how their niche will look like, I cannot tell, though I agree with Juergen Habermas that states should support the existence of qualitative print dailies, since they seem to be the best source for reliable and true information in this time of so called ‘fake news’.

Finally, as press freedom and democracy is very important in your life, can you give please some advice for younger journalists.

Very simply speaking, ask yourself everyday what are you by profession? Are you a Serb, Albanian, Croat, Bosniak or whoever else by occupation, or are you the journalist? The latter is the only way to do our job well. 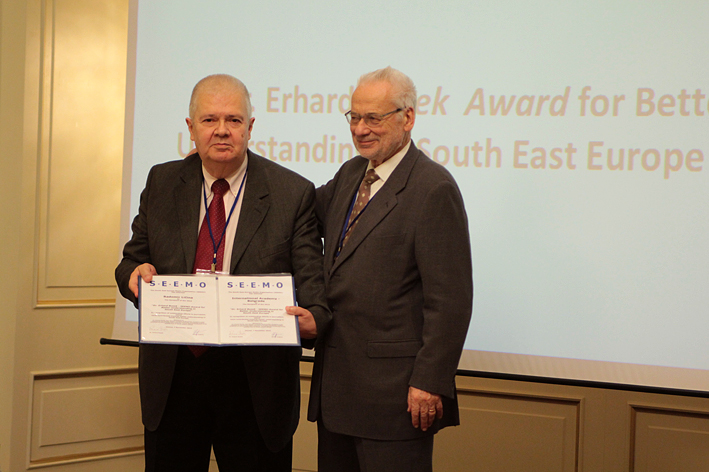