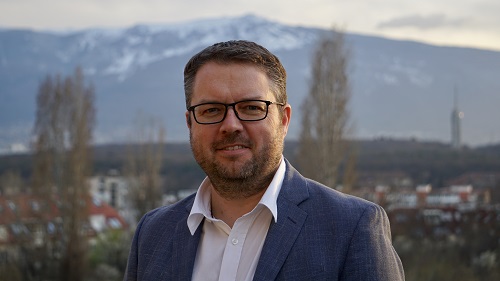 Hendrik Sittig has been director of the Media Programme for South East Europe of the Konrad-Adenauer-Stiftung, located in Sofia, since 2018. Previously, he worked for the programme directorate (TV, Radio, Online) at the public broadcaster Rundfunk Berlin-Brandenburg (rbb). Hendrik Sittig worked as a project manager for the Konrad-Adenauer-Stiftung in Moscow from 2008 to 2010. He studied Journalism and Psychology at the University of Leipzig. Other stations: two-year editorial traineeship at a regional newspaper. Editor and reporter for the ARD Aktuell TV News and the MDR television in Leipzig and Erfurt. Working scholarships in Georgia, Poland, Belarus and Ukraine as well as one-year stay at a German-language newspaper in Western Siberia.

Despite a certain improvement of some aspects of the media situation, declining tendencies regarding media freedom in South East Europe are still prevailing. All of the countries covered by the Media Programme South East Europe of the Konrad-Adenauer-Stiftung including Albania, Bosnia and Herzegovina, Bulgaria, Croatia, Kosovo, Montenegro, North Macedonia, the Republic of Moldova, Romania and Serbia, are placed in the mid-rank of the Index of Press Freedom. Whereat Bulgaria is still experiencing the worst results within the EU and the region. They can be attributed to an inefficient judicial system and a high corruption rate. Control of the media by oligarchs is also a major problem, as well as the monopolisation of the media market and the intertwined relations between politics, media and business. Unfortunately, Bulgaria is not an isolated case. The situation is similar in all the countries of South East Europe. For example, Serbia has deteriorated extremely compared to the previous years, mainly due to its lack of media independence and existing political influence and pressure on the editorial freedom. Nevertheless, there are also positive examples in the Press Freedom Index such as in the case of North Macedonia, which improved significantly over the last few years.
However, there are even more issues that led to the rather unsatisfactory results of the Index. There are a number of developments in the region that negatively impact the media freedom. On the one hand, the economic pressure on newspapers, radio and television is increasing due to the continuing growth of online media and social media services. On the other hand, established media are struggling with diminishing public trust. Additionally, there is the increasing political pressure to which the media are exposed. Governments use advertising budgets and subsidies to ensure positive reporting. Many print media outlets, television and radio stations are owned by oligarchs who have no interest in independent journalism but pursue their own political and economic agenda. Often the media ownership and funding is unclear, making it impossible to track the interests behind. Other issues include unattractive working conditions for journalists, legal deficits and weak self-regulation in the sector.
Thus, the media landscape in South East Europe cannot be observed separately from the society and politics. The South East European countries are all going through a long process of transformation from a communist system to a democracy. The awareness for the need of free media must be raised and this is a challenge for all societies.
Another eminent topic concerns the public service media and the fact, that they have been repeatedly criticised for being the mouthpiece of the government and for allowing political interference in reporting and structures of the media outlets. The described issue is of importance insofar as public service media need to be a source for serious, reliable and objective information. The KAS Media Programme has taken a closer look at current developments in this field with its book “A pillar of democracy on shaky ground – Public Service Media in South East Europe” published in 2019. It gives a complete overview of Public Service Media in the region and aims though giving impetus for possible reforms. Theoretically, the existing legal framework of the public service media provides a good basis for independent, democratic journalistic work in most of the countries in South East Europe. However, due to political influence for example by the composition of the supervisory boards and government-dependent funding a gap occurs between theory and practice. A recent representative opinion poll commissioned by the KAS Media Programme and conducted by the research institute Ipsos in 2019 shows very clear that more than two thirds of the respondents in South East Europe say that public service media are important for democracy. In the same time, almost 65 percent see these channels under political influence as described above.
The main aim of the Media Programme South East Europe of the Konrad-Adenauer-Stiftung (KAS) is to strengthen the role of the media in the process of democratisation and transformation. However, this goal can only be achieved when all relevant actors for the development of free and independent media are involved. This include the journalists, but also media entrepreneurs, politicians, civil society and the academic community. Above all, it is also about a common understanding of the role of the media in a democracy. Against this background, our Media Programme organises and supports educational measures and dialogue programmes together with national and regional partners to intensify cooperation and exchange between the countries. We work together with persons and institutions involved in professional media work: journalists from all media sectors, publishers, managers of media houses, professional organisations and non-governmental organisations, media lawyers and academics, communication experts and politicians. In the measures of the Media Programme, the practical work focuses on the qualification of journalists so that they can better fulfil their role as watchdogs and information providers. Closely related to this is the promotion of media freedom and pluralism of opinion by maintaining dialogue between politics, the media and civil society. Modern, professional and responsible political communication is a key component of this dialogue and therefore within the network of the European People’s Party (EPP), KAS supports the partner parties in the region in professionalising their communication.