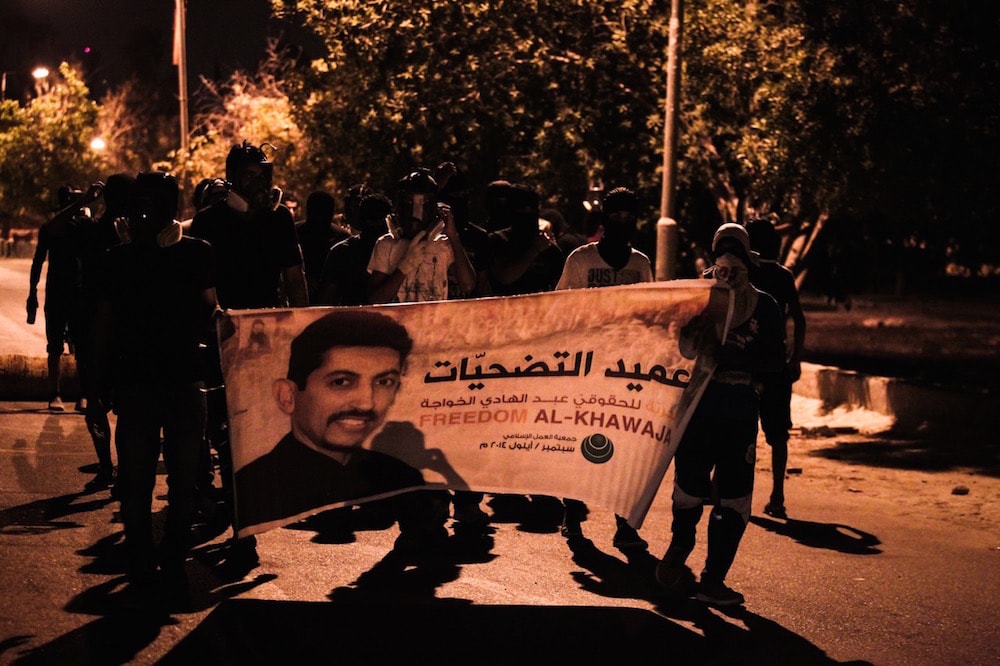 We the undersigned, more than 100 organisations from around the world, are appealing for your assistance to secure the release of prominent human rights defender and dual Danish-Bahraini citizen Abdul-Hadi Al-Khawaja from prison in Bahrain, where he is serving a life sentence for his peaceful political and human rights activities in violation of his right to freedom of expression. As he completes the tenth year of his imprisonment, we appeal to you directly as head of the Government of Denmark to renew and strengthen efforts to ensure his immediate and unconditional release so he can be reunited with his family and receive much needed medical treatment and torture rehabilitation in Denmark.

An internationally-recognised human rights defender, Al-Khawaja is the co-founder of both the Gulf Centre for Human Rights (GCHR) and the Bahrain Center for Human Rights (BCHR), for which he was also the former President, and he worked as MENA Protection Coordinator for Front Line Defenders from 2008 until early 2011.

He was arrested on 9 April 2011 for his role in organising peaceful protests to defend people’s rights and to demand political reform during the popular movement which began in February 2011. Security forces violently arrested Al-Khawaja, as detailed in a report by the Bahrain Independent Commission of Inquiry (BICI), published in November 2011 at the request of the Bahraini king. It says, “Immediately after the arrest, the detainee received a hard blow to the side of his face, which broke his jaw and knocked him to the ground. He was taken to the Ministry of Interior (MoI) clinic and then the Bahrain Defence Forces (BDF) Hospital where he had major jaw surgery for four broken bones in his face.” Al-Khawaja was subjected to additional severe physical, psychological and sexual torture in detention (as described in the BICI report, as Case No. 8.)

Security officers tortured Al-Khawaja directly after his major jaw surgery, while blindfolded and restrained to a military hospital bed, which forced the doctor to ask the security officers to stop as it would undo the surgical work. Almost ten years later he still suffers from chronic pain and requires additional surgery to remove the metal plates and screws that were used to reattach his jaw. Despite continuous requests, including through Danish diplomats, his medical records were not shared with the family for a second opinion and recently the authorities claimed that the records had “gone missing”.

In June 2011, Al-Khawaja was sentenced to life imprisonment following unfair trials in courts that did not comply with Bahraini criminal law or international fair trial standards.

In a recent call, Al-Khawaja listed four concerns, including that prison authorities placed restrictions on phone calls with his family whom he hasn’t seen in person since January 2020 due to Covid-19, and confiscated hundreds of his books and reading materials. He also stated that prison authorities are arbitrarily denying him proper medical treatment and refusing to refer him to specialists for surgeries he requires. Denying a prisoner adequate medical care violates the United Nations Standard Minimum Rules for the Treatment of Prisoners, known as the Nelson Mandela Rules.

Finally, Al-Khawaja continues to protest his arbitrary detention. Since his arrest, Al-Khawaja has undertaken six hunger strikes (of liquids only), including one lasting 110 days in 2012, to protest conditions in Jau Prison and his unjust imprisonment. Shortly after his arrest, the UN Working Group on Arbitrary Detention concluded that Al-Khawaja’s arrest is arbitrary, as it resulted from his exercise of the fundamental rights to freedom of expression, peaceful assembly, and association, and called for his release.

In March 2020, at the start of the Covid-19 pandemic, Bahrain released 1,486 prisoners, 901 of whom received royal pardons on “humanitarian grounds.” However, Al-Khawaja and other prominent human rights defenders and activists – many of whom are older and/or suffer from underlying medical conditions – were not among those released.

We appreciate the efforts of Foreign Minister Jeppe Kofod, who supported resolutions at the European Parliament when he was a member, in 2014 and 2017, calling for Al-Khawaja, as well as other human rights defenders detained in Bahrain as a result of their peaceful and legitimate human rights work, to be freed.

Today, we the undersigned organisations appeal to you personally to facilitate negotiations between your government and the government of Bahrain to secure the immediate and unconditional freedom of a Danish citizen who has been unjustly detained for almost a decade so that he can receive proper medical treatment and be reunited with his family.