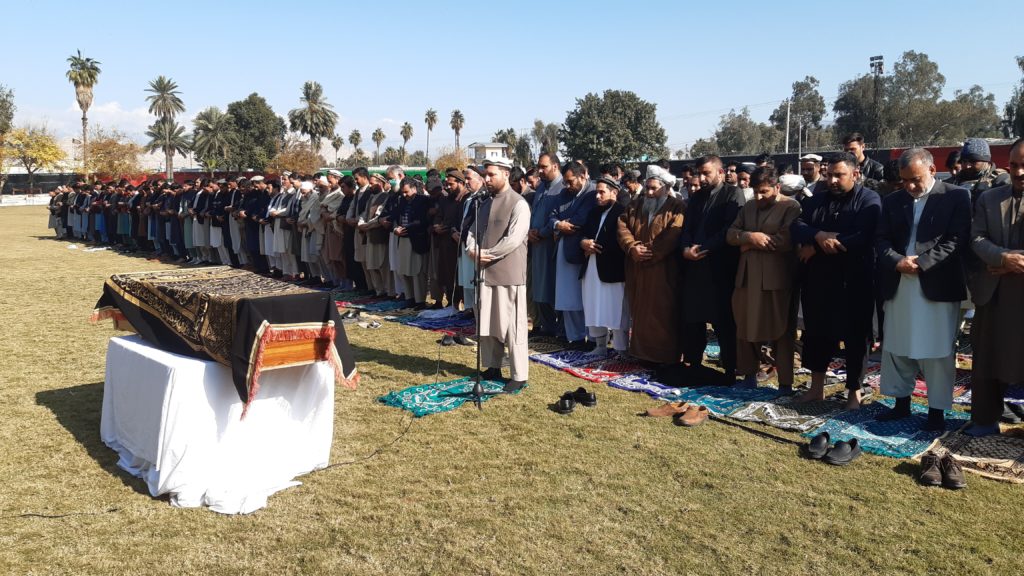 People attend the funeral ceremony of Malalai Maiwand, a journalist at Enikass Radio and TV in Nangarhar, after she was killed along with her driver in an attack on their vehicle in Jalalabad, capital of the eastern province of Nangarhar, on December 10, 2020 in Jalalabad, Afghanistan. (Photo by Wali Sabawoon/Anadolu Agency via Getty Images)

In a letter to the UNSC and UNAMA, civil society organisations from around the globe highlight the wave of journalist killings in Afghanistan and urge them to act now.

Dear permanent and elected members of the UN Security Council and Deborah Lyons, Head of the United Nations Assistance Mission in Afghanistan

The Afghanistan Journalists Center (AFJC) and undersigned civil society organizations, dedicated to the defense and promotion of free expression and the safety of journalists, are deeply concerned by the torrent of targeted killings of journalists in Afghanistan since early 2020. These attacks have had a devastating impact on Afghanistan’s vulnerable civic space, press freedom, and related democratic rights, and we write to urge you to take immediate action.

AFJC’s press freedom tracker has documented 11 journalists and media workers who have been killed in Afghanistan since the peace deal was signed between the United States and Taliban in February 2020. Most of these journalists were deliberately targeted for their work, which underscores the lack of effective human rights protections in the country. Among the eight journalists are TV presenter Malala Maiwand, who was killed on Human Rights Day on December 10, 2020 with her driver, freelance photojournalist Rahmatullah Nikzad, who was killed in Ghazni province on December 21, 2020, and Besmillah Adel Aimaq, a radio journalist who was killed in Central Ghor province on January 1, 2021.

Media freedom and freedom of expression are human rights recognized under international legal conventions that Afghanistan is a party to, as well as domestic law. Article 19 of the International Covenant on Civil and Political Rights protects the freedom to seek, receive and impart information and ideas, while enforcement of Afghan Media Laws ensuring the security of journalists and media outlets is a fundamental responsibility of the Afghan government. Although some efforts have been made by the government to protect and uphold these rights, they have not been sufficient to prevent violations, and prosecute the perpetrators of violence against journalists. The Afghan government has made repeated pledges to ensure the security of Afghan civilians, yet there remains a culture of impunity for those responsible for carrying out targeted killings of journalists.

In response to this failure, AFJC and 200 journalists published a letter in July 2020 to Afghan President Ashraf Ghani and called on the government to end this worrying trend. Likewise, in December 2020, an EU delegation representing 8 EU member states plus Australia, Canada, the NATO Mission to Afghanistan, Norway, the United Kingdom and the U.S. Mission based in Kabul condemned the targeted and unlawful attacks on representatives of the media and called on the state to investigate and prosecute those who target these individuals with violence and immediately end impunity for killings.

We believe that strong and concerted political action from the United Nations Security Council and increased support from the UN Assistance Mission in Afghanistan are now essential, given their interest in a peaceful transition and the role that a free press plays in this endeavour. Targeting journalists creates a societal ripple effect of fear and censorship and deprives the public of crucial information about the peace process. Therefore, we request that the UN Security Council stand against the ongoing impunity for attacks against journalists in Afghanistan.

We, the undersigned organizations, call on the United Nations Security Council and UNAMA to support the media community by calling on all parties to stop violence against journalists in accordance with United Nations Security Council Resolution 2222 (2015) and other established UN standards for the protection of journalists in conflicts and warzones. Among these are the 2012 UN Plan of Action on the Safety of Journalists and the Issue of Impunity, which also calls for the need to “strengthen provisions for the safety of journalists in conflict zones” (paragraph 5.24).

With these calls to action in mind, and in light of the distinctive threats faced by journalists outlined above, the Council should:

• Use every diplomatic power at their disposal to ensure the protection of press freedom and the safety of journalists and media workers as a group of civilians under the imminent threat of physical violence in Afghanistan today and in the event that the peace deal results in a new political settlement;

• Intensify efforts to protect journalists in Afghanistan, in particular working together with the government to take serious actions to end impunity and pressure the perpetrators to cease targeting journalists;

• Scrutinize and reconsider international financial support to the Afghan government, to ensure meaningful commitments to protect media freedom and the rule of law.

• Encourage the international community to offer and strengthen practical and accessible support to threatened journalists and media workers, such as safe passage, refuge and medical assistance where necessary

Initiative for Freedom of Expression – Turkey

Vigilance for Democracy and the Civic State