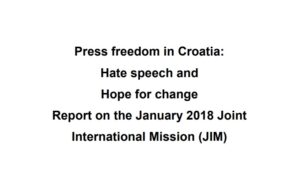 This report summarises the findings of a two-day Joint International Mission (JIM), 15-16 January 2018, to Croatia led by the South East Europe Media Organisation (SEEMO) and including representatives from the Association of European Journalists (AEJ), European Broadcasting Union (EBU), the European Federation of Journalists (EFJ), the European Centre for Press and Media Freedom (ECPMF) and the Reporters Without Borders (RSF).