Slovenia takes over the rotating Presidency of the Council of the European Union in July 2021 amidst widespread concern from media freedom organisations, civil society groups, and European institutions about a steady deterioration of media freedom. To assess the situation and better understand key developments, the Media Freedom Rapid Response (MFRR) undertook an online mission to Slovenia between 24 May – 2 June 2021.

The Slovenian government of Prime Minister Janez Janša is overseeing an increasingly systematic effort to undermine critical media, a coalition of press freedom organisations and journalism groups warn today in a new report.
The report concludes that Slovenia, which assumes the rotating presidency of the EU on July 1, has seen press freedom deteriorate ever since Janša returned to power in March 2020. Since then, the ruling SDS party has embarked on a multipronged campaign to reshape the media landscape in favour of a pro-government narrative, renewing tactics successful during previous administrations and forging ahead with new forms of pressure.
The front line of this campaign is an aggressive attempt to seize greater control of the country’s public service broadcaster and national news agency using a mix of legal and administrative pressure, as well as vicious, often highly personal smears aimed at undermining the integrity and independence of these institutions.
The Slovenian Press Agency (STA), the lifeblood of the media market, has been drained of state funding since the beginning of the year in a calculated effort by the Government Communication Office (UKOM) to subdue the organisation and cement greater control over its financial and managerial operations.
Though the recent announcement that the government will finally pay an advance of €845.000 for 2021 costs is welcome, serious concerns remain over the conditionality of this agreement and its detrimental effects on the independence of the agency. We believe the government is only making this move because of the sustained criticism it has received for its actions and the need to remedy the situation before assuming the EU Presidency.
More broadly, leading government officials, including Janša himself, are stoking the toxicity of public debate by insulting and denigrating journalists – including via official government channels. This inflammatory rhetoric has led to rising self-censorship and an upsurge in threats against the press, both online and offline. Women journalists are particularly targeted with misogynistic and sexist insults.
Behind the scenes, an effort by SDS is underway to limit critical journalism at mainstream media and strengthen a network of partisan outlets linked to the government. Propaganda media are being rewarded with lucrative state advertising contracts, while government officials have sought to pressure editorial offices and reduce challenging coverage at some of the country‘s biggest commercial outlets.
These tactics raise alarm as they reflect elements of the media capture strategy employed by Hungarian leader Viktor Orbán. Moreover, an influx of Hungarian capital linked to Orbán’s Fidesz party is being used to prop up Slovenian pro-government media. Recently, Slovenia’s state-owned telecoms company suspended the sale of a media company after a Hungarian pro-government media outlet was outbid, raising questions about market manipulation and efforts to sell state media assets to SDS‘s political allies in Budapest.
The Janša administration has defended its media policy as necessary to “rebalance” a media landscape it claims is dominated by a historic leftist ideology. Aside from the fact that governments have no business interfering with the editorial lines of media outlets, SDS’ actions and rhetoric do not indicate a genuine interest in fostering greater pluralism but rather in delegitimizing independent media in favour of government-friendly coverage. The depiction of the press as beholden to a political ideology is used to divide the journalistic community down political lines and taint watchdog reporting as biased “opposition journalism”.
While legitimate concerns remain regarding post-independence media ownership concentration and transparency in the Slovenian media market, plans by the ruling SDS party would exacerbate those issues or pose new problems. Legislative proposals to tackle alleged bias at the STA would likewise increase political control over its oversight bodies, rather than lessen it.
While a fragile governing coalition and pushback from civil society and the journalistic community have so far limited the worst of the government’s attempts to erode critical journalism, significant damage has already been caused to the STA and media freedom more widely is once again under sustained threat.
The report follows a two-week online mission to Slovenia carried out by the Media Freedom Rapid Response (MFRR) between 24 May and 2 June 2021. Jointly led by the European Federation of Journalists (EFJ) and the International Press Institute (IPI), it was joined by MFRR members Article 19, the European Centre for Press and Media Freedom, Free Press Unlimited and Osservatorio Balcani e Caucaso Transeuropa. Representatives of Reporters Without Borders (RSF), European Broadcasting Union, South East Europe Media Organisation and the Public Media Alliance also participated.

MISSION TO SLOVENIA - SEEMO as observer 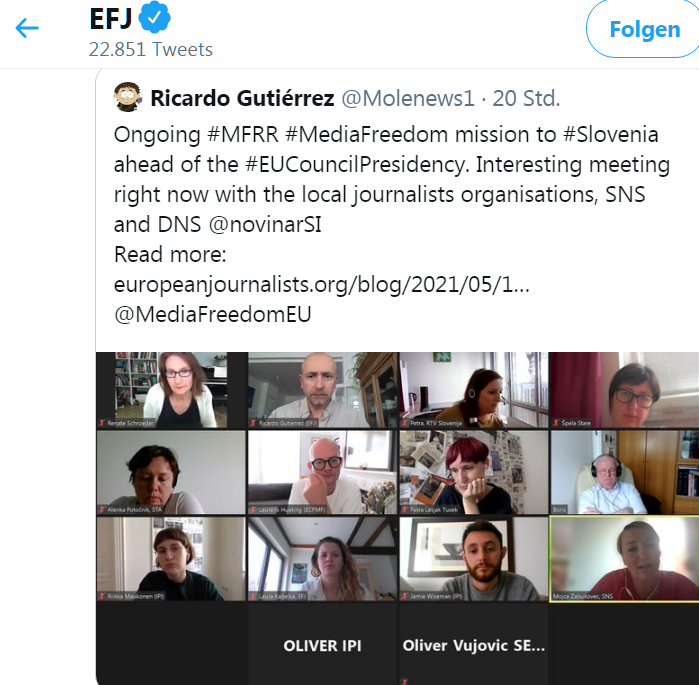 The Media Freedom Rapid Response (MFRR) will hold an online mission to Slovenia between 26 May and 4 June 2021 to assess growing concerns about the deteriorating climate for press and media freedom over the past year. The South East Europe Media Organisation (SEEMO) will participate as observer-organisation.

The virtual fact-finding mission will be led jointly by the European Federation of Journalists (EFJ) and the International Press Institute (IPI), in partnership with the Slovenian Journalists’ Association (DNS).

Over a two-week period, the MFRR will meet with a variety of stakeholders including journalists, editors, associations, civil society, academics and MEPs from across the political spectrum, as well as state institutions and representatives of the government.
The MFRR delegation will also meet virtually with representatives from the public broadcaster RTVSLO and the Slovenian Press Agency (STA) to discuss growing pressure on the Central European country’s public service media.

The aim of the mission will be to better understand key developments in the framework of media freedom in Slovenia over the last year and assess the main challenges facing journalists and other media actors.

A mission report published in July will present the MFRR’s findings and set out a list of recommendations for both the governing coalition government and the European Union. When international travel is possible, the MFRR plans to travel to Ljubljana to meet with stakeholders on the ground and meet in person with government representatives.
The mission comes as Slovenia prepares to take over the rotating presidency of the Council of the EU and amidst mounting concerns over media freedom from national associations, international groups and European institutions.

Over the last year, the MFRR has expressed growing alarm about the sharp increase in vocal attacks and smears on journalists by public figures including Prime Minister Janša, and clear attempts to exert greater control over the country’s public service media. The mission will address these issues as well as concerns over journalists’ safety, legal threats and media pluralism.

The MFRR tracks, monitors and responds to violations of press and media freedom in EU member states and candidate countries. It has organised a number of similar missions over the past year to Montenegro, Poland, Serbia and Spain.