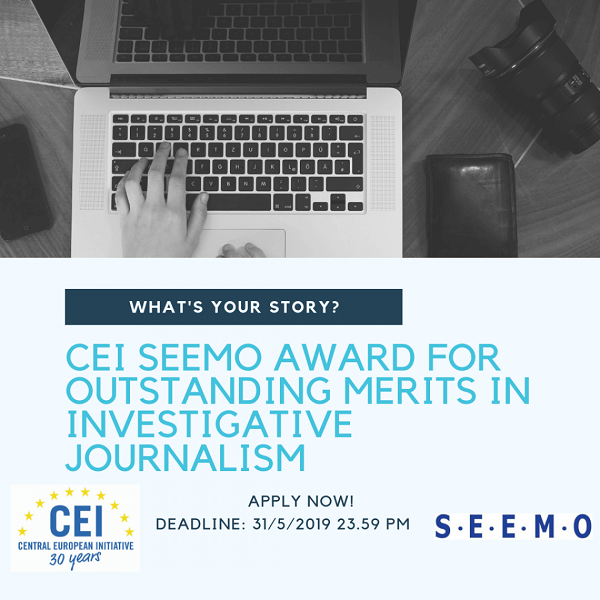 The Central European Initiative (CEI) and the South East Europe Media Organisation (SEEMO) have opened the Call for Applications 2019 of the CEI SEEMO Award for Outstanding Merits in Investigative Journalism. The Award is meant to honour the work carried out by investigative journalists and their contribution to investigative reporting despite the difficult conditions under which they often have to operate.

Category 2: candidates who have been actively involved in investigative reporting, even in the context of training activities organised by schools/universities/NGOs and, as a result, should have published at least one investigative story meeting all professional standards. One sample of journalistic work will be relevant for the evaluation from the jury.

The following documents in PDF format shall be uploaded:

The Central European Initiative (CEI) is a regional intergovernmental forum committed to supporting European integration and sustainable development through cooperation between and among its Member States and with the European Union, international and regional organisations as well as with other public or private institutions and non-governmental organisations. While acting as a platform for political dialogue, the CEI has developed a strong operational, result-oriented approach to regional cooperation. It combines multilateral diplomacy and fund, programme and project management as both donor and recipient. The CEI, whose Headquarters are located in Trieste, is composed of 17 Member States: 9 EU members (Bulgaria, Croatia, Czech Republic, Hungary, Italy, Poland, Romania, Slovakia, Slovenia) and 8 non-EU members (Albania, Belarus, Bosnia and Herzegovina, North Macedonia, Moldova, Montenegro, Serbia, Ukraine).

The South East Europe Media Organisation (SEEMO) is a regional non-governmental, non-profit network of editors, media executives and leading journalists from newspapers, magazines, radio and TV stations, news agencies and news media in South East and Central Europe with more than 2600 individual members. With its committees, the SEEMO aims to create a bridge between international media activities and the media developments in the region. One of SEEMO’s main activities is protecting press freedom by helping journalists and media outlets in South East and Central Europe. Over 60 percent of SEEMO’s press releases and letters of protest to governmental and other officials have had positive results. The SEEMO works in cooperation with the International Institute – International Media Center (II-IMC) and the South East and Central Europe PR Organisation (SECEPRO).