The Dr. Erhard Busek SEEMO Award for Better Understanding in 2006 to Danko Plevnik from Croatia 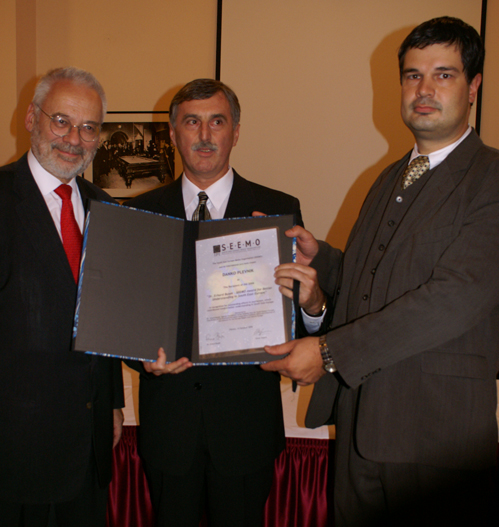 After careful deliberation, the jury has chosen Danko Plevnik, international relations columnist for the Croatian daily newspaper Slobodna Dalmacija from Split, as this year’s winner. Plevnik is also the author of several books analysing media, such as Information is Communication (1986), Towards the Civilisation of Mobile Text (1988) and The Practice of Ethical Journalism (2004). Plevnik has also published a number of books on politics, European Union, and the Balkans, among others. Soon his two new books, The Right to Self-Meaning and The Fortune of Reading will also be available.

A journalist since 1977, Plevnik holds a PhD in Information Science and was chosen for his year long work in the media field in South East Europe. As a guest columnist, he has written for some of the most important newspapers in the former Yugoslavia such as Danas (Zagreb), Delo (Ljubljana), Oslobođenje (Sarajevo), Nin (Belgrade). Moreover, he has also written for a number of distinguished European ones: Frankfurter Rundschau, Wiener Zeitung, and Il Piccolo, as well as professional magazines.

He was also an honorary member of the Washington-based National Press Club (1996) and a member of the following organisations: the Executive Committee of the Association of European Journalists (1999-2001) and its Arbitrary Commission (2002-2004), the Executive Committee of the Croatian Journalists’ Association (2001-2003), and the International Communications Forum. He is also a former co-ordinator of the South East Europe Media Organisation (SEEMO) for Croatia. In 1991, he was named Journalist of the Year in Croatia by Slobodna Dalmacija and by the Croatian Journalists’ Association (HND) in 1991 and 1992. He also received the Public Award for Journalism by the Karlovac County in 2001