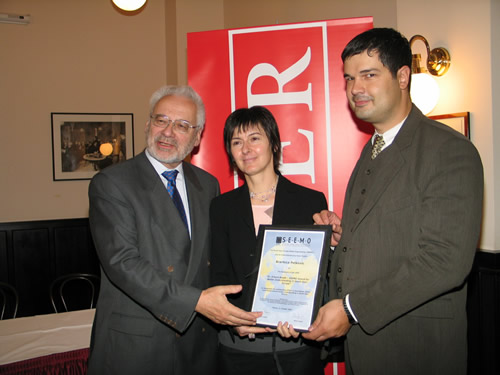 The Vienna based South East Europe Media Organisation (SEEMO), a network of editors, media executives and leading journalists in South East Europe and an affiliate of the International Press Institute, is pleased to announce the winner of the Dr. Erhard Busek – SEEMO 2005 Award for Better Understanding in South East Europe. The eleven members of the jury have chosen Brankica Petkovic, Head of the Center for Media Policy at the Peace Institute in Ljubljana, Slovenia, and Editor-in-Chief of the book versions of Media Watch and Media Watch Journal, as this year’s winner. She is also the author of a number of articles on media representations of minorities, with a special focus on the Roma minority in Slovenia.

Petkovic, who has been a journalist since 1986, was chosen for her longstanding media work in South East Europe. One of the main reasons for the award is Petkovic’s involvement in attempts to improve the status of minority groups and citizens in the South East European media, work that resulted in a better understanding of minorities in the region and a raising of awareness for their problems. She was also a trainer at courses for Roma journalists. Petkovic was project leader for the regional project “Media ownership and its impact on media independence and pluralism in South East European and new EU member countries,” that enabled a better understanding of the media ownership situation in South East Europe. She is also co-author of the book Media Ownership.

Sponsored by Dr. Erhard Busek, Special Co-ordinator of the Stability Pact for South Eastern Europe, Coordinator of the Southeast European Cooperative Initiative (SECI), President of the European Forum Alpbach, Chairman of the “Institute for the Danube Region and Central Europe” and former Vice-Chancellor of Austria, the 2,000 Euro award is given annually to a journalist, editor, media executive or person educating journalists in South East Europe, who, through the media, has promoted a climate of better understanding among peoples in the region and worked towards ending minority problems, ethnic divisions, racism, xenophobia, etc.